WATGB: All In The Same Boat

To coincide with their new monthly residency on the MDR airwaves, Where Are The Girl Bands? offer us a monthly glimpse into what they've been up to and what's caught their attention over the past 30 days...

On the 12th of December we had the pleasure of hosting our ‘All in the Same Boat’ gig at Bloom Building Birkenhead as part of our ongoing Alternative Spaces Series in which we challenge the conventions of gigs and aim to offer community, support and new opportunities for artists on the Merseyside Creative Scene.

The event was a night of debuts, creating a supportive space for musicians starting out (be it in their music careers, or moving into the Merseyside music scene from another) to perform, meet other new faces on the scene and establish their next steps. Alongside the curation of this line-up, each of the artists are also receiving further support from local creatives we have paired them up with to make sure everyone receives a warm welcome to the Liverpool music scene and has their work legitimised with the guarantee of future opportunities after taking this first step. 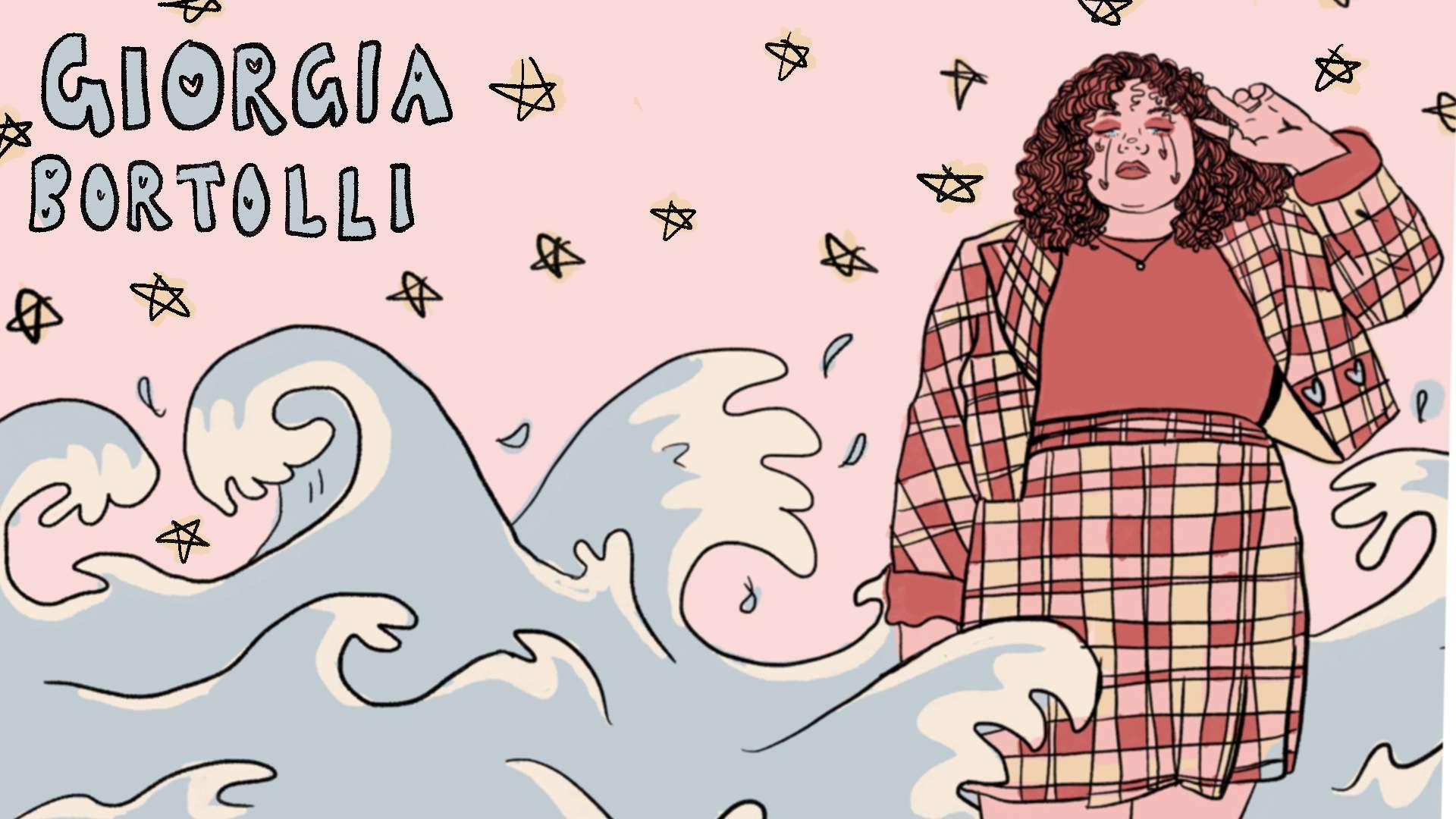 The evening began with the bright and shining Giorgia Bortolli taking the stage. With oceans of charisma and the talent to match, Giorgia fills the room with both her beautiful, powerful voice and her incredible stage presence. Giorgia begins her set by giving some context to who she is and why she writes the songs she does, stating that “This collection of songs are based around fatphobia, body positivity, love, loss and hoodoo mixed with a beat you can’t help but move to.” And she was right! Everyone was swaying in their seats, magnetised to Giorgia’s movements on stage, drawn in by her words of empowerment and affirmation. Beginning with a cover of ‘Juice’ by Lizzo, Giorgia’s intention to bring good vibes and uplifting messages was set. Her choreography and glittery outfit paired with her impactful confidence are made for the stage, for an arena in fact!

Sat listening to this debut performance it was easy to visualise a crowd of adoring fans moved by the love pouring out of Giorgia with each lovingly produced song. Her original ‘Beach Body’ was a personal favourite of mine as Giorgia spoke on beauty standards, reaching out to the audience with hand gestures and steady eye contact as she let us all know that we are beautiful and don’t need to change to meet toxic expectations, all set to a bold pop sound. ‘Spellbound’ was another enticing number, hypnotising the audience with trancelike beats, her voice calling into the crowd like a siren to hear her tale with all of the good vibes you get dancing along to pop icons like Kylie Minogue. 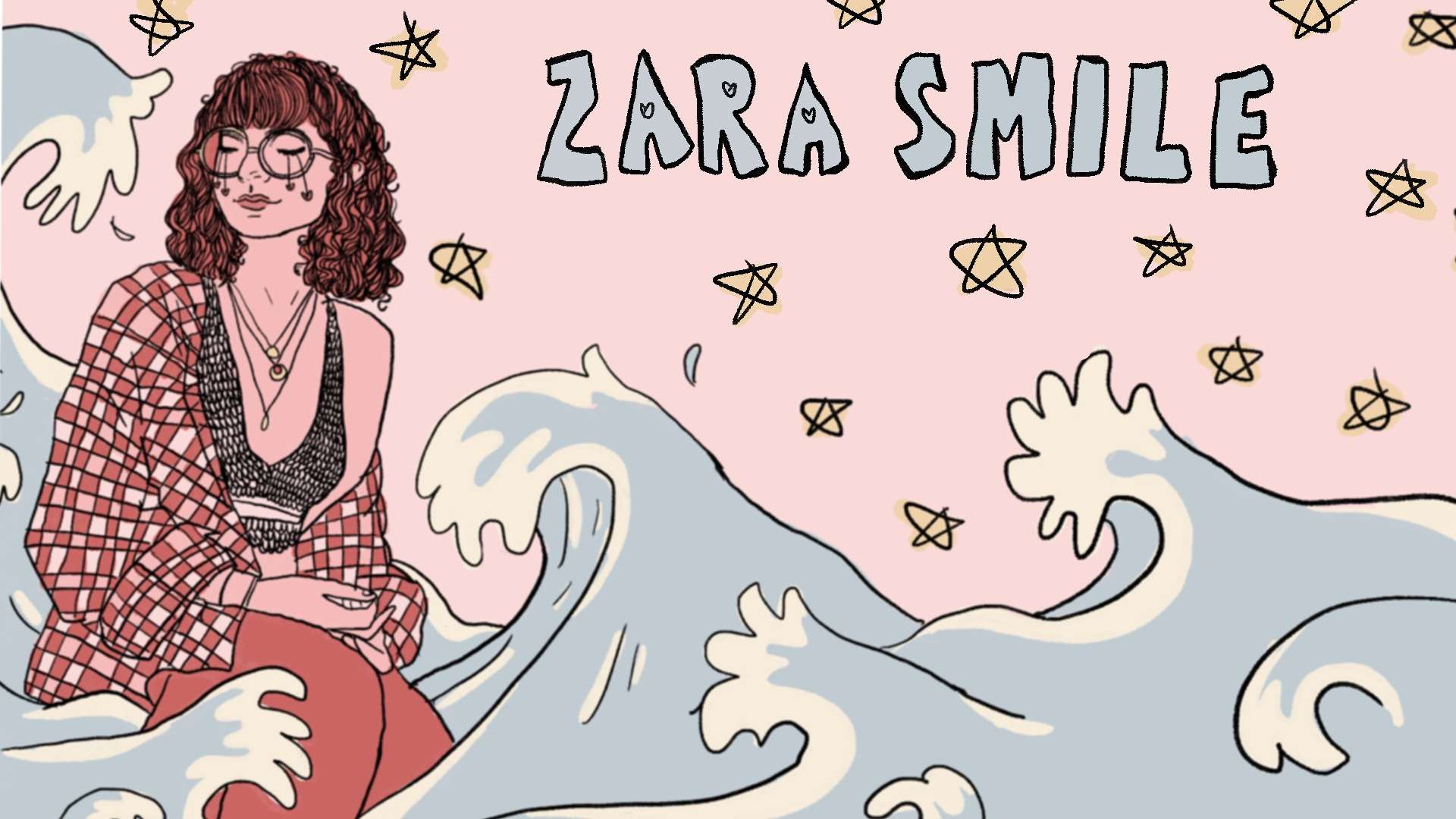 Next up was Zara Smile, a 19 year old indie folk pop artist from South London who has found her feet in Liverpool this year. Zara took the stage with an ethereal presence and a powerful voice. With a paired back guitar accompaniment and honest lyrics depicting experiences of being Queer, mixed race and views on society, Zara Smile feels raw and unfiltered on stage. As a Queer woman myself, hearing Queer love songs so candidly sang is a very impactful experience and I felt seen in the complex words sang around Zara’s experiences in love.

There was a feeling of fairy tale as she sang of the dysfunctional love stories we tell ourselves when wearing our rose-tinted glasses. The smooth electric sound felt at home on the stage of Bloom, as Zara sang under pink and green lights. A personal highlight of the set was Zara’s adaption of the ten minute All Too Well (Taylor’s Version) in which Zara had selected their favourite lyrics and was singing with all the passion of someone who’s fallen down the Taylor Swift vs Jake Gyllenhaal hole (very much like myself). Zara’s truthful sweetness was a joy to watch and will be a delight to see develop throughout their career. 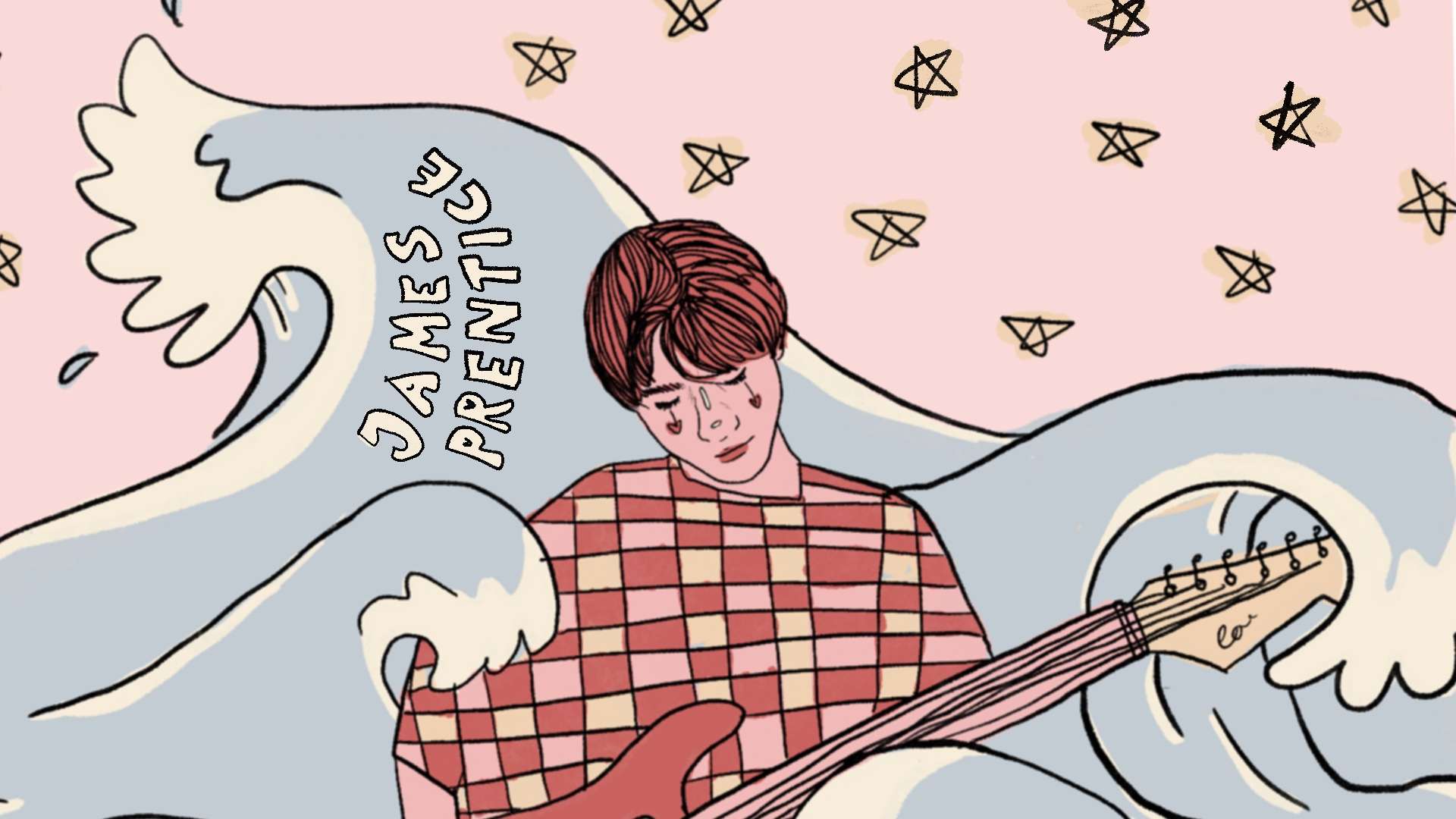 James Prentice followed, bringing a new fire and feeling to the stage. Based in Manchester, James had brought with him all of the wit and sensitivity of Northern indie icons like Alex Turner to his set. His lyrics were full of smoky imagery, backed by emotion and the vocals to match, accompanied by the passionate strumming of his guitar. ‘In Control’ was an example of James Prentice’s clever use of lyricism, sounding like a Shakespearean monologue if it was written in the tongue of a Manchester lad depicting nights out and loves lost, with cheeky twists and beautifully crafted hooks.

The audience were strung along by his storytelling, completely caught up in the narratives of neon lights and narcissistic relationships. This anecdotal style of singing would fit right in to the likes of indie rock nights in the Jac Basement, and we encourage anyone looking for up and coming talents for taking a crowd on a journey through the sounds of indie rock to check out James’s tunes and give him a bell! 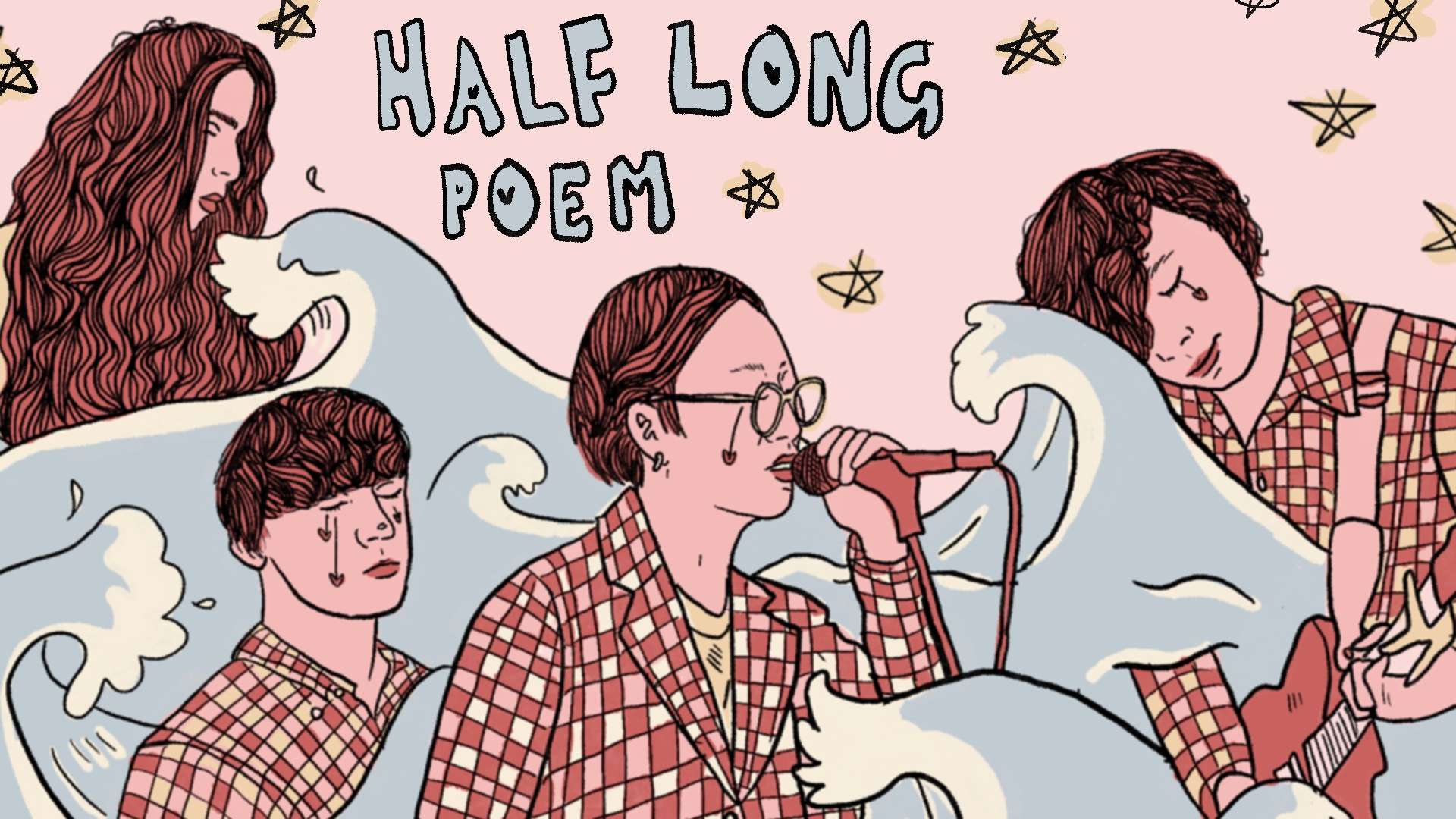 Next up on stage were the sunshine-y alternative rock band ‘Half Long Poem’. While they are new to the Liverpool stage with some of its members having moved from China recently, the band have an impressive CV having been selected by Modern Sky in their Young Blood program, winning the monthly Young Blood Band in June 2019, alongside performing at Sound City and having an upcoming gig at one of the biggest music festivals in China, Strawberry Music Festival. Despite their accolades, the members were not only humble, but full of gratitude and joyful energy. When writing notes for this article at the gig, I couldn’t help but type out hypothetical situations where their music would provide the perfect soundtrack; from the moment in an indie-rom com where the main character announces their adoration for the love interest, to a Ferris Bueller style scene in which Half Long Poem’s songs are being listened to on a Walkman, the backing track to a daydreamy bike ride through a suburban town.

What came through all the songs was that their music is feel good, super sweet music with the edge of an alternative rock sound. Through the performance, each musician took it in turns to have their moment for a solo, showing off their talents as individuals as well as their impressively tight performance as a band who haven’t been playing together for long. With the loveliest of lyrics and songs like ‘Plus One’ filled with romance, and others speaking about bubble tea and other wholesome topics I was reminded of the Cure’s happier songs, with their high energy softness and catchy choruses. 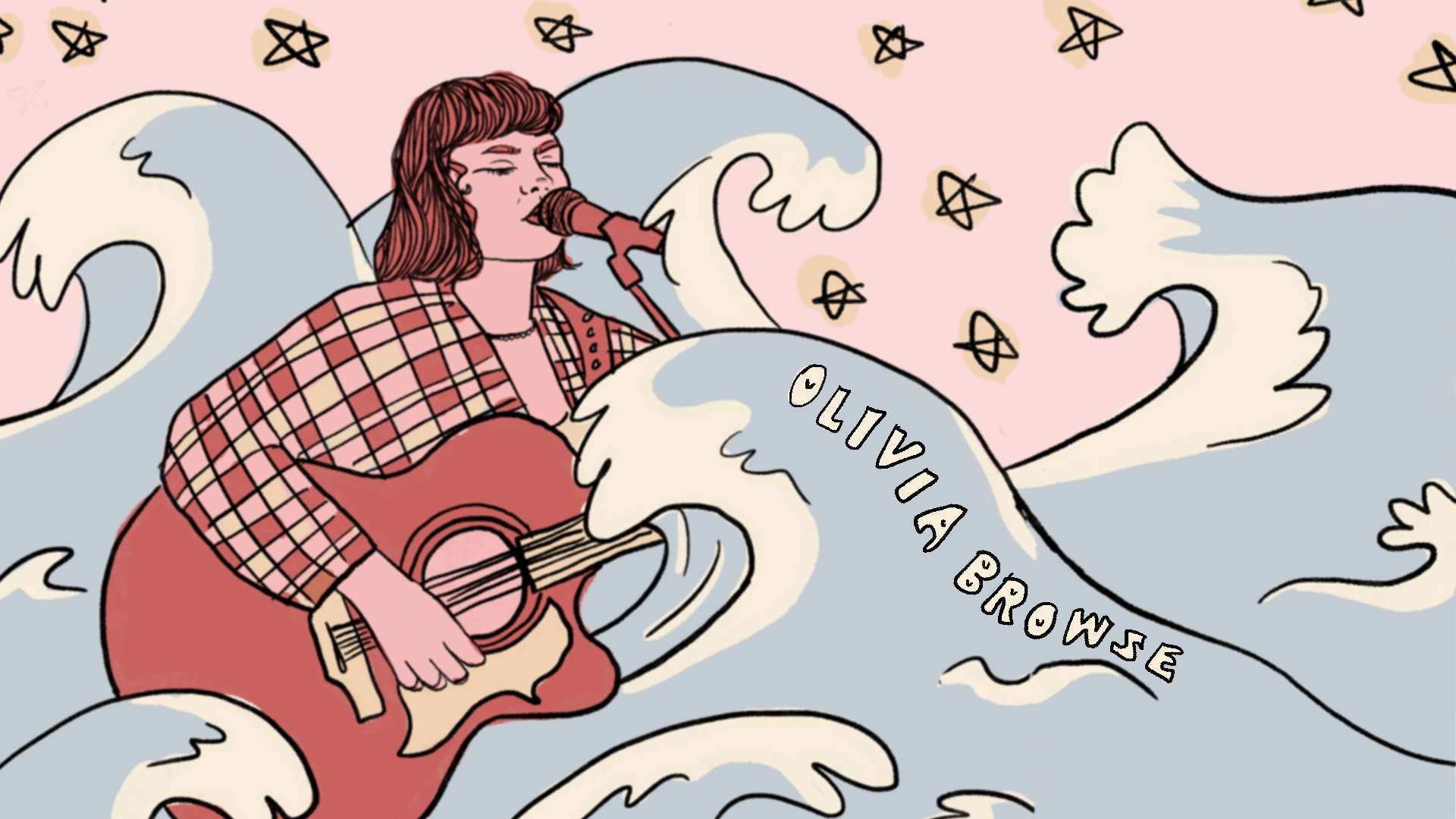 Our headliner for the evening was Manchester’s own ‘Olivia Browse’. Having written several reviews for Olivia and falling in love with the cleverly crafted lyrics and catchy melodies that encapsulate a whole spectrum of emotion, it was a real pleasure to be able to set the stage for Olivia’s debut in Merseyside! While Olivia’s music ranges from bubble-gum sweet 2000s pop to all of the aching of listening to slow songs alone in your room, this set had a steady acoustic set up.

Olivia took to the stage with the voice of a haunting folk artist, wearing cigarette earrings and speaking on the realities of her life, feeling somewhere between Lilly Allen and Jodie Mitchell. Olivia Browse’s lyrics are so raw and honest they feel ripped straight from the pages of a diary, speaking of life in such a straight way it’s poetic, summing up love and life in neat and truthful phrases. With melancholy Christmas songs and tunes that felt like confessions, her set had everyone tied to Olivia and the experiences that were so candidly and beautifully shared. With amazing voice control and an assured use of her accompaniment, the set allowed for the audience to really hear these truths and it felt like a real honour to be let in to such personal experiences of the world.

The night ended with the musicians in conversation with one another, sharing socials and commenting on their favourite moments from each other’s sets; a sight that left myself and Eve absolutely joyous. It will be incredibly exciting to see their pathways as musicians! If any of these descriptions peaked your fancy, please check them out on their social medias and on streaming platforms!

We also have exciting news that we will be hosting a second instalment of ‘All in the Same Boat’ on Sunday 16th January with the tickets and line up to be announced soon. Head on down to give a warm welcome to an amazing array of creative talent from poets to musicians making their first steps into the Merseyside creative scene.