Mates’ Crates, a series headed up by our friend Andrei Sandu, dives into the tales behind records and digs deeper into our connections to music. Fresh funk this time with Willie Hale's "Groove On".

Folamour has experienced a meteoric rise over the last few years - and for good reason. Alongside recent poppy crossovers with SG Lewis and Liv East, the French DJ digs deep. Bear with me on this one, I'll get there...

His Tapes for The PPL mix series is beautiful, and many of his productions adeptly sample funk and soul greats. The lead track on his debut album draws on Earth, Wind and Fire's smooth groover "Devotion", whilst "Petit Prince Du Macadam" chops up "Get Into The Party Life" by - you guessed it - Willie "Little Beaver" Hale. (So does Jay Z on "Party Life").

Born in Arkansas in 1945 and nicknamed "Little Beaver" for his prominent teeth, Willie Hale became a virtuoso guitarist from a young age. In 1969, he signed to Cat Records, an offshoot of Henry Stone's TK Records - home to KC and The Sunshine Band, George McCrae and many more. 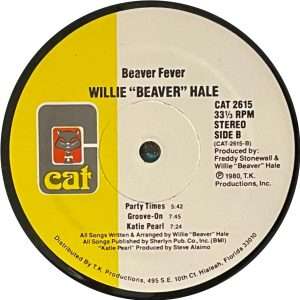 Hale played on many hit TK recordings, including Betty Wright's "Clean Up Woman", then launched his solo career in 1972. Both Benny Latimore and Timmy Thomas played keys on many of his records.  Hale's biggest hit, "Party Down" came in 1974, on the same album that brought us "Get Into The Party Life" and "Let The Good Times Roll".

Six years later came his fifth album, "Beaver Fever". On this record,  "I Feel Like Crying" was produced by New York jazz musician Bobby Caldwell, best known for "What You Wouldn't Do For Love" (later sampled and covered countless times, including by Michael Boothman).

Without doubt, though, the best track on "Beaver Fever" is "Groove On". Told you I'd get there. This track is almost eight minutes of bliss. I couldn't disagree more with  music critic Robert Christagu, who once wrote that "the great T.K. guitarist ... has a problem when he sings, which is that he can't." Rubbish. Groove on, Little Beaver, groove on.