Mates’ Crates, a series headed up by our friend Andrei Sandu, dives into the tales behind records and digs deeper into our connections to music. A smooth bit of Portuguese rock this time with "Cadunta" by Very Nice.

I've wanted this record from the moment I first heard it. I opened my first ever Mates' Crates radio show with it. After finally ordering it from Portugal, I'm delighted to feature here. I'll let the track speak for itself, and share instead what I learned about its enigmatic performer.

For a start, "Very Nice" is hardly an easy alias to look up. I guess search engine optimisation back in 1978 wasn't what it is now... The man behind the adjective is Fernando António Girão de Freitas, born in São Paulo to Brazilian singer Maria Girão and Portuguese guitarist Fernando de Freitas.

After learning to play guitar from his father, Fernando Jr. fronted several rock bands in Rio de Janeiro. At the age of 17, he moved to Portugal and formed the band "Pentagono", at the centre of the country's rock scene.

As part of "The Heavy Band", Girão de Freitas moved to Angola from 1971 to 1973, where the group and recorded two singles. I was surprised to read that these were released on the local subsidiary of a Portuguese label, until I realised that Angola remained a Portuguese colony until 1975. 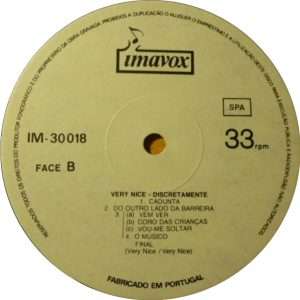 His first solo single, "Engrenagem", was released in 1972. After that came "Brothers Of The Sun", then "Discretamente", on which I found "Cadunta".

In Portugal, his mixed heritage led to the nickname "O Índio", "The Indian", and this cross-culturalism is a running theme of his very nice story. Bouncing from band to band, country to country, and genre to genre, Girão de Freitas has since lived in Paris and Madrid. Over his career, he has worked with Airto Moreira, Flora Purim, Gilberto Gil and Hermeto Pascoal, to name but a few.

In the 1980s, he sang the jingle for a Portuguese office machinery company. As recently as 2018 - at the age of almost 70 - he sang vocals on a heavy metal album. Yet more incredibly, he has played semi-professional football on both sides of the Atlantic and is now a coach.

It's hard to get your head around how much this man has done. So don't sweat it - hit replay on "Cadunta" instead.