Mates' Crates: The Valentine Brothers - Money's Too Tight (To Mention)

Mates’ Crates, a series headed up by our friend Andrei Sandu, dives into the tales behind records and digs deeper into our connections to music. Squelchy disco funk this time with The Valentine Brothers' "Money's Too Tight To Mention".

You might have heard Simply Red's version, but for me, this is the real deal.

The year was 2019 and I was packed in to Phonica Records in London to hear Canadian DJ Jayda G play a set to celebrate her album launch. Such memories of cramming ten-to-a-metre into tiny venues feel alien amongst the recent need to stay six feet apart. With auto-Shazam in overdrive, I discovered dozens of tracks that night, but this one by the Valentine Brothers stood out.

Born in Columbus, Ohio, Billy and John Valentine started performing together in 1975, before which Billy had sung with soul and jazz duo Young-Holt Unlimited, whose "Soulful Strut" I'd heard with vocals from Barbara Acklin. 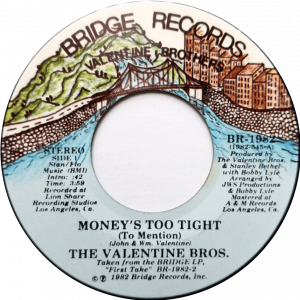 From 1977, The Valentine Brothers spent three years in the touring company for the musical The Wiz, which told the story of The Wizard of Oz in a contemporary African-American context. Interestingly, Motown acquired film rights to the play, resulting in a 1978 movie with Diana Ross as Dorothy, Michael Jackson as The Scarecrow and seminal stand-up comedian Richard Pryor as the Wizard. Despite box office failure, it has since become a cult hit.

The Valentines released their first album in 1979, but it was their second which brought us "Money's Too Tight (to Mention)", lamenting President Reagan's spending cuts. Although it spent over three months in the Billboard R&B chart, it was the 1985 version by British pop group Simply Red which found global success, reaching the Top Ten across the world.

For me though, nothing beats the drive and squelchy bassline of the original. Enjoy.

As an aside, I think Jayda's Grammy-nominated "Both of Us" was a festival anthem released in the year that festival's weren't.