Mates’ Crates, a series headed up by our friend Andrei Sandu, dives into the tales behind records and digs deeper into our connections to music. These are not reviews, they’re stories. This time, we're back in the UK with Pigbag's Papa's Got A Brand New Pigbag.

If you listen closely enough to this wild dance-punk jam, its influence on a lot of noughties indie starts to creep out.

Pigbag were formed in Cheltenham in late 1980 by Chris Hamlin, a fashion student at Cheltenham Art College, through improvisation sessions in the bedroom of his student house. Rumour has it that the sleeve for Papa… is based on the ‘tribal graffiti’ that Hamlin had drawn on the walls of that room.

Papa’s Got A Brand New Pigbag was recorded in 1981. It’s a real wild ride that captures the improvised jam atmosphere through which the band came together. Bass, percussion and brass elements are constantly vying for the listener’s attention, more like jazz than punk-rock. I was overjoyed to find it in the bargain bin at Pop Brixton’s Container Records. 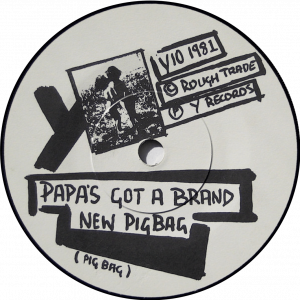 The record is considered an early incarnation of dance-punk, a genre I hadn’t really known by name but claims to capture a lot of noughties indie. Think Bloc Party, Franz Ferdinand, Klaxons, Digitalism, Electric Six, Yeah Yeah Yeahs and the Ting Tings... A real nostalgia trip.

BBC Music’s David Stubbs wrote that “Sometimes, in order to be taken seriously by posterity, it’s better to have no hits than one hit.” I haven’t decided whether I agree or not, but it can certainly be argued that Pigbag’s post-punk credentials and enviable blend of punk, avant jazz, soul and ska might have been washed away by the over-familiarity of this record.

The name is clearly a play on James Brown’s Papa’s Got A Brand New Bag, though Pigbag’s brass riff is now surely more deeply ingrained into popular culture than Brown’s. Equally iconic is the bassline, which Stylus Magazine charted as the 40th greatest of all time in 2005.

Whereas the record did not initially make the UK mainstream charts, a 1982 re-release reached number 3. A slew of dreadful electro remixes followed. In 1995, a trance mix by British DJ Paul Oakenfold reached sixth in the UK chart; DJ duo Thunderpuss scored a US dance number 1 with a hideous version in 2001 and Italian sample-fiend Alex Gaudino (of Destination Calabria fame) added some dreadful lyrics to his own version in 2008.

Perhaps most unexpectedly, it was also used as the theme tune to a mid-nineties Russian TV show called "Look Out, Modern!". I was gutted to find nothing about the show online other than that clip, but it looks wild.

Pigbag’s wordplay didn’t end at this record, with their debut album titled Dr. Heckle and Mr. Jive. In stark contrast with this linguistic ingenuity, I was unamused to find that Thunderpuss also released equally trashy early-naughties big-room under the alias Pusaka, from which middle-eastern aubergine-based dishes across the world have been trying to distance themselves ever since…