Mates’ Crates, a series headed up by our friend Andrei Sandu, dives into the tales behind records and digs deeper into our connections to music. This time, Jamaican soul and rocksteady legend Phyllis Dillon with her cover of Marlena Shaw's "Woman of the Ghetto".

I could write about so many of the tracks on Soul Jazz Records' iconic 1998 compilation of ska, soul, rocksteady and funk from Jamaica, aptly titled "100% Dynamite". But at the same time, I didn't have to think twice about which track to pick.

But I was always going to write about Phyllis Dillon's cover of Marlena Shaw's "Woman of the Ghetto". As I wrote here, Shaw's electrifying live version at the 1973 Montreux Jazz Festival addressed gender and race discrimination in America like almost nothing that came before.

Unsurprisingly, it has been covered and sampled several times, including on Blue Boy's "Remember Me", which picks out Shaw's line about black woman often raising  the children of wealthy white families. Dillon's version has always been a favourite, subsequently used by prolific Jamaican DJ I-Roy on his 1973 track "Dr. Phibbs". 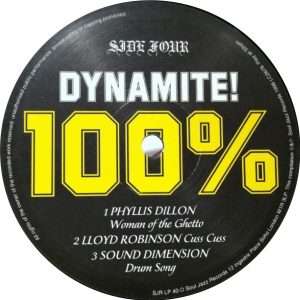 Born in 1944 in St. Catherine, Jamaica, Dillon recorded her first track in 1966. "Don't Stay Away" was described as "perhaps the finest female performance in Jamaican music", and launched a career which spanned almost four decades.

Many of her subsequent recordings - including "Woman of the Ghetto" - were covers of American songs, her beautiful version of Alberto Dominguez's "Perfidia" stands out. As does her 1967 original "It's Rocking Time", which Alton Ellis drew on for "Rocksteady"!

I was surprised to discover that Dillon moved to the US at the end of 1967 and spend the next year juggling a family and banking job in New York with frequent flights back to Kingston to continue recording. She stopped making music in 1971, and didn't return until twenty years later, when invited to perform at a Kingston Hotel. After initially refusing, singing there sparked tours of the UK, Germany and Japan, before returning to the studio in 1998.

As I wrote in my recent host spotlight, I'm fascinated by music which sits at the intersection of different cultures, so hearing Dillon cover Shaw is truly special.