Mates’ Crates, a series headed up by our friend Andrei Sandu, dives into the tales behind records and digs deeper into our connections to music. With international travel still restricted, we head to Italy (at least in spirit) with a big disco track from Ornella Vanoni.

An icon of Italian pop, Ornella Vanoni's career spans over sixty years and is still going. My first and favourite encounter was Ti Voglio.

Born to a Milanese family in 1934, Vanoni debuted as a theatre actress in the late 1950s and began singing soon after, quickly earning the nickname "cantante della mala" ("Singer of the Underworld") for records about criminals.

In the early 1960s, she met songwriter Gino Paoli and scored her first national pop hits with "Che cosa c'e" ("What's Up") and "Senza Fine" ("Endless", later covered by Dean Martin and Wes Montgomery. Vanoni moved to Rome and established her own label in 1974, establishing her place amongst Italian music greats. With national fame and a fashion sense admired by Gianni Versace, Vanoni also became a representation of the new Italian woman as feminism began to grow in the country. 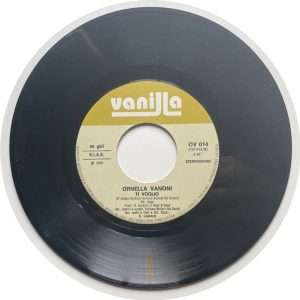 Given my love for Brazilian music (well documented on the Mates' Crates radio show), I was delighted to find that Vanoni's 1970 hit "L'appuntamento" ("The Appointment" used on the soundtrack of Oceans Twelve) is a cover of Erasmo and Roberto Carlos' "Sentado à Beira do Caminho" ("Sitting by the Roadside"). In 1976, she also collaborated with bossa nova pioneers Vinícius de Moraes and Toquinho on "La voglia, la pazzia, l'incoscienza e l'allegria" ("The Desire, The madness, The Unconsciousness and The Joy").

Then, in 1977, came "Ti Voglio" ("I Want You"). From the strings, to the groove; the melody to the backing vocals, I love everything about this track. Released as a single on the B-side of quintessential Euro-ballad "Domani No" ("Tomorrow No"), I was delighted when the copy I ordered from Greece finally arrived.

Remixers including Italy's elusive Fresco Edits and Brazil's Rafael Cancian (released on seminal Brooklyn edits label Razor 'N' Tape) have taken on Vanoni's original. Whilst I'm a firm believer in the power of a 4/4 kick, nothing touches her original. What a record.