Mates’ Crates, a series headed up by our friend Andrei Sandu, dives into the tales behind records and digs deeper into our connections to music. This time, Afro-Cuban funk via Central Europe with Lupita by Nico Gomez.

I've tended to avoid compilations in the past, favouring the "real deal" for reasons I can't explain and my wallet doesn't appreciate.  Digging in Hoxton's LoveVinyl last week, though, I came across something quite simply too good to be true.

As a collection of so many of my favourite tracks, it felt like the first edition of Mr. Bongo's Brazilian Beats should have been right in front of me all along. I'll try my best to stick to just one here, but I can't encourage you enough to listen through all eighteen of the beautiful pieces of music on this double LP.

Performed by Nico Gomez And His Afro Percussion Inc., "Lupita" is a high-energy dancefloor heater that'll get you dancing every kind of way. When you hear the name Nico Gomez, I suspect you weren't picturing a Dutch-Belgian man named Joseph van het Groenwoud. (Neither did you picture a Dutch man called Bastian Bron when you first heard Fatima Yamaha's "What's A Girl To Do", but let's save that story for another time).

Born in 1925 in Amsterdam to a Dutch Father and a South American mother, van het Groenwoud spent his youth in the Caribbean. After briefly returning to the Netherlands, he fled to Belgium in 1946 to escape from serving in the Dutch army in Indonesia. Inspired by his love for Cuban music, he soon changed his name to Nico Gomez. Incidentally, Gomez's son Raymond van het Groenwoud is one of Belgium's most popular singers. 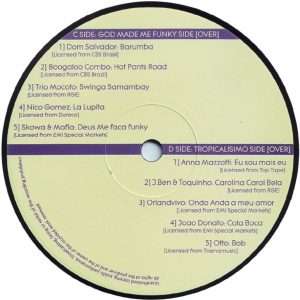 A talented guitarist with an uncommon knowledge of South American music, he performed as part of several Dutch-Belgian orchestras before forming his own. As is so often the case, the group's music has been periodically rediscovered, reissued and (re)introduced to new generations.

"Lupita" is a cover of the 1954 track "Mambo Lupita" by legendary Cuban bandleader Perez Prado. Widely regarded as the King of Mambo, he released "Mambo No. 5" the same year (Lou Bega will have to settle for the title of "prince", at best). Not to be 'that guy', but I prefer "Mambo No. 8", recorded two years later.

I couldn't find any information on whether Gomez' musicians were also Dutch-Belgian, but the group wouldn't be unique in this regard. As I wrote here, samba disco trio "Two Man Sound" (best known for "Que Tal America") were also Belgian, as were The Chakachas (featured on GTA V, GTA San Andreas, and Kendrick Lamar's "Backseat Freestyle"). Indeed, Gomez wrote The Chakachas' "Ay Mulata".

It hurts my head a bit to realise that I came across this Afro-Cuban track performed by a Dutch musician on a Brazilian compilation by an English record label. But I think that's OK. Enjoy.