Mates’ Crates, a series headed up by our friend Andrei Sandu, dives into the tales behind records and digs deeper into our connections to music. To kick off the new year, we've got some gospel from Mighty Clouds of Joy.

Formed in 1959 in Los Angeles, The Mighty Clouds of Joy began as a traditional gospel quartet, but found fame in the 1960s for incorporating elements of funk and soul. Alongside their explicitly religious material, which kept its Christian essence through their experimentation with musical styles, the group also covered popular hits including The O'Jays' "Love Train", The Isley Brothers' "Shout" and Billy Preston's "You Are So Beautiful".

I can't remember the first time I heard The Mighty Clouds of Joy (or indeed, the first time I heard gospel), but "Glow Love" has always been a favourite. After discovering that it was released a label called Myrrh (of "Gold, Frankincense and..." fame), it felt right to finally buy the record for Christmas. It now sits alongside New York Community Choir's "Express Yourself", Twinkie Clark's "Awake O Zion", and (of course) The Joubert Singers' "Stand On The Word" in the small but growing gospel section of my collection. It turns out that both NYCC and The Mighty Clouds of Joy have covered the gospel (turned gospel-disco) staple "I'll Keep A Light In My Window", which resurfaced on Netflix' "The Get Down". 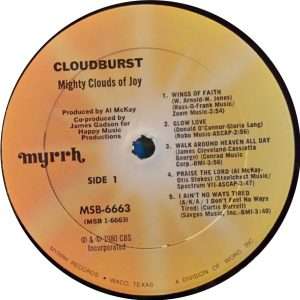 Looking into "Glow Love" on Discogs, my eyes lit up when I saw that it was arranged by Gene Dozier but - whilst he has produced for Minnie Ripperton, Wilson Pickett and many, many more - Gene is no relation to the legendary Lamont Dozier.

After going down that rabbit hole (as you knew I would), I did find that Lamont Dozier's (actual) son Beau has featured on tracks with Snoop Dogg and produced for The Backstreet Boys, Ariana Grande and Beyonce. Allegedly, he also co-wrote a track for Ben E. King at the age of seven, but I dare say I'm sceptical.

Whilst it has no connection to Lamont Dozier, "Glow Love" has ties to several other music legends. The guitar is played by Al McKay of Earth, Wind and Fire, and James Jamerson Jr. (of Chanson, and son of legendary Motown bassist James Jamerson) plays bass across the album.

With musical DNA like that, it's unsurprising that "Glow Love" is such a mighty cloud of joy. In 2022, as the Mighty Clouds tell us, you must be about the love!