Live from Liverpool: Wake Up! with - Abbie & Eddie

Mates’ Crates, a series headed up by our friend Andrei Sandu, dives into the tales behind records and digs deeper into our connections to music. LGBT month might have just wrapped up, but there's no time like the present for a vogue and ballroom anthem: MFSB's "Love Is The Message".

Whilst I often mention MFSB, it's about time they got a column of their own. Assembled as the studio band for Gamble and Huff's Philadelphia International Records, the group played on hits by The O'Jays, Billy Paul and Harold Melvin & The Blue Notes to name but a few.

Depending on who you ask, MFSB stands for Mother, Father, Sister, Brother (identifying them as a spiritual family of musicians), or for Mother-Fuckin’ Son-of-a-Bitch (a complement the musicians gave each other).

Instrumental (pun intended) to shaping the "Philly sound", the band's 1973 single "TSOP (The Sound Of Philadelphia)" defined early disco and became the theme for the Soul Train TV show. The same year, they put out their debut album, "Love Is The Message", from which the titular track is truly special.

Released in the final year of America's involvement in the Vietnam War, the song's title and cover art are no accident.  Early disco was still closer to "message music" like gospel than to synthesisers.

But the track took a step closer to the dancefloor with the 12" version, which became a staple of New York's vogue and ballroom scene. Whilst mainstream awareness of the movement grew in the 1980s, I was surprised to learn that the first drag balls took place as early as the 1880s in Washington D.C.. 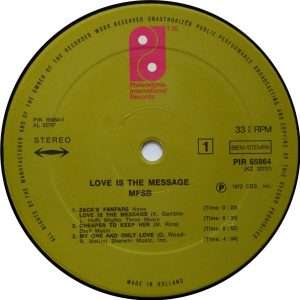 It was almost twenty years before MFSB's track was dethroned as the ballroom anthem, by Masters At Work's "The Ha Dance". For "Ha", Kenny Dope and Little Louie sampled a controversial soundbite from Dan Ackroyd and Eddie Murphy's film Trading Places (more here). Whilst different in so many ways, that choppy energy - as if made for voguing - runs through both tracks.

We can't talk about the ballroom scene without mentioning Madonna, whose 1990 single propelled voguing into the public consciousness. Interestingly, "Vogue" was produced by Shep Pettibone, who also remixed Carl Bean's "I Was Born This Way", another gay anthem.

MFSB's bloodline to "Vogue" is pretty direct. "Love Is The Message" was sampled on The Salsoul Orchestra's 1983 "Love Break", which was in turn sampled on "Vogue". Indeed, Salsoul absorbed many members of MFSB, who left Philadelphia International Records in 1974 after financial disagreements).

Madonna and Pettibone were sued for sampling "Love Break" without permission. They won the case by arguing that a 0.2-second horn stab was small enough to be trivial, setting an interesting precedent after NWA were previously successfully sued for using a two-second guitar riff from Funkadelic on their track "100 Miles and Runnin".

Leon Vynehall's "It's Just (House of Dupree)" is amongst several other tracks to use the iconic chops from "Love Break". Its title also name-checks one of the most famous ballroom "houses", which emerged as alternative families for the black and latino LGBT community.

As you can tell, we're strayed so far from where we started because it is so difficult to keep track of MFSB's influence. The band was made up of more than 30 musicians, many of whom worked on several projects at once. Several were also members of The Trammps, for example.

So as one the first tracks to be inducted into the newly formed Dance Music Hall of Fame, "Love Is the Message" is the best that I could find to encapsulate the group's immeasurable impact.