Mates’ Crates, a series headed up by our friend Andrei Sandu, dives into the tales behind records and digs deeper into our connections to music. This time, Japanese latin jazz (for real)!

On a trip to Columbia Road Flower Market (a word of advice - if you're going to buy a small olive tree, buy it at the end of your visit, so you don't then carry it around for hours), I discovered Idle Moments. Run by the team behind Giant Steps sound system and Dalston restaurant/venue Brilliant Corners, Idle Moments is part wine shop, part record store specialising in Japanese imports.

As soon as I heard the "pa-pa-paya" vocalisations on the title track, I was sold. Probably my obsession with Polish jazz singer Ursula Dudziak's "Papaya" and similar sounds on Gilberto Gil's iconic "Palco"...

I couldn't find much on what brought Takanaka to release a whole album of latin jazz, but I'm glad he did. Alongside the title track, "Beleza Pula" and "Disco B" stood out to me, and the rhythm on the latter reminded me of Bill Withers' "You Got The Stuff", which I played on last month's show. I wrote the last sentence that way so that I could save this one for "Star Wars Samba" - exactly what it says on the tin - a latin jazz version of John Williams' Star Wars theme, infused with Japanese city pop guitar. Yes please. 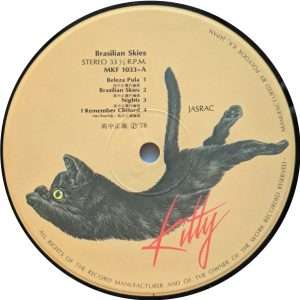 Listen to the whole album here, and see if you also feel like you're  cruising along in an open-topped Ferrari in an old SEGA OutRun arcade game.

The title of Sadistic Mika Band's 1974 album "Black Ship" likely refers to the term given to Western vessels arriving in Japan in the 16th and 19th centuries. The most famous of these was US Navy commodore Matthew C. Perry, whose gunboat diplomacy led to the 1854 Convention of Kanagawa. Signed under threat of force, the treaty opened Japanese ports to American vessels and ended 220 years of national seclusion.

But back to Takanaka, he released his first solo album in 1976, then released almost one a year for about four decades. Often performing his signature lagoon-blue Yamaha SG, his 1979 track  "Blue Lagoon" became the namesake of the label he formed in 2000.  Again, how he came to play latin jazz remains a mystery.

I'll use the last few words of this piece as a nod to the other record I bought at Idle Moments: "From Santa Claus Village", a novelty Christmas single by Japanese girl group "Shohjo Tai". The back of this record is taken up entirely by the most incredible etching of cartoon Santas and the band's motto "We wanna make you high and cute" (have a look!). The second track on the A-side is Shohjo Tai's cover of "Can't Take My Eyes Off Of You", first recorded by Frankie Valli. Fascinating.