Mates’ Crates, a series headed up by our friend Andrei Sandu, dives into the tales behind records and digs deeper into our connections to music. Kicking off 2023 with my favourite addition to my collection last year.

There are lots of reasons why you might buy a record, but there's always a real reason. More than the reason you might add a song to a Spotify playlist. You wouldn't spend the time or money without a real reason. Maybe by love of vinyl is really a love of real reasons, and where they can lead.

Our story begins mid-lockdown, when many mornings began with a long walk listening to the inimitable Charlie Bones' breakfast show on NTS. I've discovered many a new curveball from dozens of hours tuned in, but this time was different.

José Pinhal had my attention from the opening note, and with that first woodblock began a love story beyond my wildest dreams. I never thought I would be so captivated by a sound I could recreate with a pen against my own desk. I must own the record immediately. Is that a real reason? It was real to me.

But I could not own the record, and nor could anyone else. Released exclusively on cassette(!) in 1984, Pinhal's Volume 1 (of three) had never seen a pressing plant. I began checking almost weekly to see if someone out there had plans to bring Pinhal to the turntable, but as hope faded, weeks turned to months, turned to seasons.

And then, last year, it appeared. Lusofonia Record Club. A new label dedicated to preserving and promoting the cultural heritage of the lusophone (Portugese-speaking) world. Their first release, Pinhal's Volume 1.  Out of stock and €300 on Discogs. I got in touch immediately. Will there be a second run? Is there a spare? Have I really missed my only opportunity? 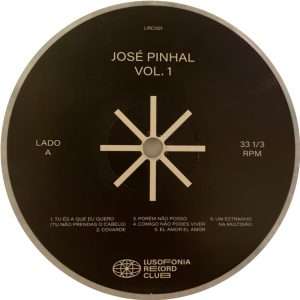 Radio silence for weeks. Or so I thought, until I discovered a reply, offering me the final copy, buried in my spam. It was amongst the angriest I've ever been. Gmail regularly finds it pertinent to let adverts for dating sites for over-50s into my inbox, but chose to rob me of one of the most important e-mails I could ever have hoped for. If it wasn't gone then, surely it was gone now. Have I really missed my only opportunity?

Much to my surprise, it was still available and, a few weeks later, in my hands. Label founders Léo and Tomas were amongst the friendliest people I've ever encountered, and we've kept in touch ever since, even meeting for a drink in Porto. I love every release and have played several on the show. That's a real reason.

Whilst my Pinhal story began in 2020, he was discovered as a solo artist in 1978, and grew in popularity through his nightclub performances, local radio presence and cassettes. As the beautifully written liner notes put it, Pinhal then "flirted with oblivion" until the early 2000s, when a copy of his tapes were found in the trash at a house in his coastal hometown in northern Portugal.

Soon shared online, the rebirth began as his music spread over the internet to parties all over the country. Eventually, Pinhal became one of the great myths of Portuguese popular music, with his own tribute band and documentary.

If I play any part in spreading the word, I'll be delighted. Check out Lusofonia Record Club here.