Mates’ Crates, a series headed up by our friend Andrei Sandu, dives into the tales behind records and digs deeper into our connections to music. An escape to Brazil this week, albeit with a track entitled "Constant Rain".

When two wonderful friends travelled to Sao Paolo over Christmas, I'd naively expected them to bring back dozens of iconic original-pressings at unbelievably low prices. Perhaps I've been watching too many crate-digging documentaries, but it has probably been decades since this has been realistic in Brazil's most populous city.

With most copies of Jorge Ben's seminal 1963 album "Samba Esquema Novo" going for at least £100 on Discogs, a reasonably priced repress as part of Polysom's "Clássicos Em Vinil" series was a delight nonetheless.

Born in Rio in 1942, Billboard Magazine describes Jorge Ben as the "father of samba rock", fusing the two genres with funk and Bossa nova to create a unique and influential signature sound. After a few years in his local church choir, Ben began performing in nightclubs, and was eventually introduced to established musicians including Tim Maia and Erasmo Carlos.

At 21, he performed "Mas Que Nada" to a small crowd which happened to include an executive from the Phillips record label, and his first single was released a week later. Despite the success of Sergio Mendes' cover, I'm always keen to emphasise that "Mas Que Nada" was Ben's original composition. Voted the fifth-greatest Brazilian song by Rolling Stone (in a list won by Chico Buarque's Construçā0), I've also heard it described as the most played Portuguese song in the US. 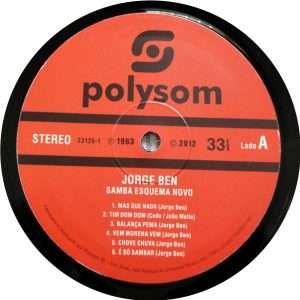 I've played several of Ben's songs on the show, including "Comanche" (about the Native American tribe) and "O Telefone Tocou Novamente" ("The Phone Rang Again"). But for me, none capture the sound of Jorge Ben better than "Chove Chuva" ("Constant Rain"). As one of his greatest commercial successes, I'm clearly not alone. After the success of his debut album, Phillips pushed Ben to release another two albums in the next year and a half.

Having played "Kent Yaşamı" by Turkish singer Senay back in November and attributed the melody to Rod Stewart's "Do You Think I'm Sexy", I was surprised to discover that Jorge Ben sued Stuart for using the melody of his 1972 single "Taj Mahal". Having heard Ben at Rio's Carnival in 1978, Stewart admitted "unconscious plagiarism" and - to his credit - settled the lawsuit and donated proceeds from his song to UNICEF. On the other hand, Stewart had "consciously" plagiarised the song's synth riff from Bobby Womack's "If You Want My Love (Put Something Down On It)".

On the subject of royalties, the keener fans amongst you might have noticed that Ben changed his artistic name to Jorge Ben Jor in the late 1980s. Whilst there are many theories on this, some sources suggest that "Jor" was added after some royalties were accidentally paid to American guitarist George Benson.

Whichever version of "Chove Chuva" does it for you - whether Ben's, Miriam Makeba's, or Sergio Mendes' (yes, he covered this one too!) - enjoy.