Mates’ Crates, a series headed up by our friend Andrei Sandu, dives into the tales behind records and digs deeper into our connections to music. These are not reviews, they’re stories. This time, Jean-Marie Bolangassa with "Rikikida".

I bought this one online on the way home from hearing it out. Truly spectacular.

There’s not much online about Jean-Marie Bolangassa. The Congolese percussionist first came to Europe in 1967 as part of the Ballet Nationale du Congo, later joining with five other emigres of the Congo, Benin and Cameroon to found seminal Afrobeat outfit M’Bamina in Milan, Italy in 1972.

The breadth of M'Bamina's material highlights everything from their West African influences to truly forward-thinking electronic funk. They performed with African music legend Manu Dibango - famous for the seminal "Soul Makossa". 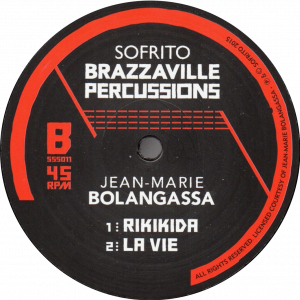 After moving to France, M'Bamina opened for James Brown at a concert at the Pavillon de Paris in 1977 with their unique blend of R&B and Funk, heavily influenced by their shared love of traditional African dance music. "Rikikida", and indeed the other two tracks on the EP, "La Vie" and "Diana Ngaï", effortlessly blend and layer Bolangassa’s traditional Congolese percussion with drum machines and synthesisers.

Ben UFO opened his 2015 Boiler Room at Barcelona’s El Poble Espanyol monastery with "Rikikida" and it set the internet alight, (wholly unnecessary) proof of how well these infectious tracks work on the modern dancefloor. When researching for this one, I discovered that Tim and Barry also played "Rikikida" on NTS last year. The same Tim and Barry who directed the music video for Tempa T’s "Next Hype". If that isn’t wide appeal…

Though I bought the record wholly for the stellar music on it, the cover art by Lewis Heriz (who also designed the beautiful cover for the Doing It In Lagos compilation of Nigerian boogie, pop and disco) was an added bonus.