Live from Liverpool: THE ONLY WAY IS UPITUP - EA Moon & Isocore

Mates’ Crates, a series headed up by our friend Andrei Sandu, dives into the tales behind records and digs deeper into our connections to music. This time, disco icons First Choice with their cover of "Love and Happiness"

As a true lover of disco, I'm frankly ashamed that I haven't yet written about First Choice. From "Doctor Love" to "Love Thang" and "Double Cross" to "Let No Man Put Asunder", they're as disco as it gets.

Starting as "The Debonettes", the band performed in Philadelphia clubs after school before being introduced to producer Norman Harris (of MFSB). Over his career, sadly cut short by cardiovascular disease at the age of 39, Harris produced for the likes of Loleatta Holloway, Eddie Kendricks and Double Exposure. So to amend my earlier statement, Norman Harris is as disco as it gets.

Whilst First Choice's first single with Harris failed to chart, I was surprised to discover that the second - "Armed and Extremely Dangerous" - was the group's biggest crossover success. For all their dancefloor classics, I was surprised that this one did best. 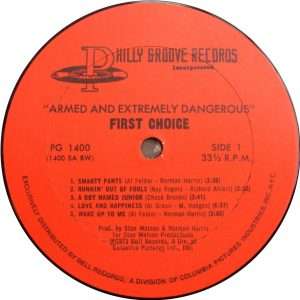 Many of their disco hits came after the move to Harris' own Goldmind label, a subsidiary of the prolific Salsoul Records. but I was once again surprised that "Let No Man Put Asunder" was released as a single three years after the group disbanded in 1980. It took longer than I care to admit to realise that "asunder"  (archaic English for "apart") wasn't "us under"...

As house music began to take over America's dancefloors, several of the group's records were sampled into club-ready DJ mixes. In fact, First Choice have been sampled almost 500 times.

And whilst the group's songs have also been covered many times, most of First Choice's releases were original compositions. Perhaps the most notable exception (I got there eventually!) is their version of Al Green's "Love and Happiness" on their debut album.

Having picked this one up in Liverpool's excellent Dig Vinyl, and also brought up a copy of "I Can Show You", First Choice felt like the right Choice for the first Mates' Crates column since our OOX trip to Liverpool (listen back here!).

After eight hours of Love and Happiness on MDR and in Melodic Bar that weekend, it felt right.