Mates' Crates: Eloise Laws - Put A Little Love Into It (When You Do It)

Mates’ Crates, a series headed up by our friend Andrei Sandu, dives into the tales behind records and digs deeper into our connections to music. Some beautiful, funky, soulful disco this time with Eloise Laws' "Put A Little Love Into It".

As one of several musically gifted siblings, I expected this piece on Eloise Laws to be full of musical connections. But even I was surprised by the web of talent around "Put A Little Love Into It".

Eloise herself was born in Texas in 1943 and began recording with the iconic Holland-Dozier-Holland production trio in the 1970s (of which  Lamont Dozier sadly passed away at the start of August). Later in her career, Laws also worked with the likes of Harvey Mason and Aquarian Dream.

Ain't It Good Feeling Good was Laws' first album, from which "Put A Little Love Into It" is undoubtedly my favourite track. The album was arranged by Dale Warren, nephew of Motown founder Berry Gordy's second wife Raymona. As well as producing for Isaac Hayes and the Staple Singers, Warren performed in the funk group 24 Carat Black.

He also worked with Japanese jazz singer Kimiko Kasai on an album which features a version of Herbie Hancock's "Chameleon" and a song called "Chain Reaction" which has nothing to do with Diana Ross. I'd known Kasai for her covers of Stevie Wonder's "As" and Bill Withers' "Use Me".

Throw me a rope ladder, because we're about to dig deeper. I also discovered that Kasai is now married to Minnie Ripperton's ex-husband Richard Rudolph. Ripperton and Rudolph's daughter Maya (herself an actor) is married to director Paul Thomas Anderson, whose latest film "Liquorice Pizza" I really enjoyed at the start of the year.

Looping back to music, the film stars Alana Haim (and indeed her sisters) of the pop-rock band Haim - an appropriate segue to finally get me back to the musical family I'm supposed to be writing about. 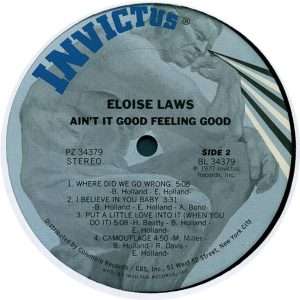 Perhaps the best-known Laws sibling is Hubert, a flautist and saxophonist whose career spans countless genres, decades and collaborations. As well as working with everyone from Aretha Franklin and Ella Fitzgerald to Quncy Jones and Stevie Wonder, he was an early member of jazz fusion group The Crusaders.

In 1971, Laws released a critically-acclaimed album covering classical compositions by the likes of Bach and Debussy, supported by an all-star cast including Brazilian musician Airto Moreira on percussion. The same year, he the flute played on Gil Scott-Herron's "The Revolution Will Not Be Televised".

My first encounter with Hubert Laws was his 1980 record "Family", aptly named given that his sister Debra features as a vocalist. In 2003, she sued J.Lo for sampling her "Very Special" on "All I Have". Laws lost, as her label had granted permission. She then sued her label but lost again.

Debra's "Very Special" album was produced by her (other) brother, saxophonist Ronnie Laws. Ronnie's career began alongside South African trumpeter Hugh Masakela, before joining Earth, Wind and Fire. He is surely best known for his 1975 track "Always There", which has been covered several times by Side Effect, Willie Bobo, Jeff Lorber and - most successfully - Incognito ft. Jocelyn Brown.

And just as you reach for the handbrake, we've reached the end of our race through (and around) the Laws. There's some motion sickness tablets in the glove compartment, I'll drive more carefully next time.