Mates’ Crates, a series headed up by our friend Andrei Sandu, dives into the tales behind records and digs deeper into our connections to music. A delightful Stevie cover this time with Elkie Brooks' version of "As".

Digging in charity shops is always fun. I find that I'm much less likely to come across something I really want, which makes it all the more exciting when I do - even more so when it's an absolute bargain. Finding a copy of Elkie Brooks' third album, "Shooting Star", was one such joy (as was finding a lovely repress of an Ennio Morricone soundtrack on the same trip).

Like so many of the pieces I write for this column, my first encounter with Brooks' music was slightly convoluted. I am a longtime fan of Cut Glass' 1980 record "The Rising Cost of Love" (a cover of Jean Terrell, who took over as lead vocalist of The Supremes after Diana Ross). Brooks released her own version of this song in 1979, which I discovered via a recent(ish) edit by Percolate residents Krywald and Farrer.

I'd first encountered Krywald and Farrer at a festival which bundled attendees into blacked-out coaches and drove us out to an unidentified woodland, but that's a story for another time.

By some margin, the standout track on "Shooting Star" is Brooks'  cover of Stevie Wonder's "As" (also covered by George Michael and Mary J. Blige, but you knew that). These columns are filed under "Short Reads", so I'll spare you the deep dive on Stevie! 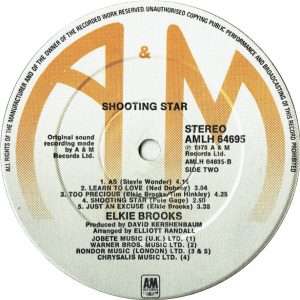 Reading up on her career, I learned that Brooks is no stranger to a cover - her first record was a version of Etta James' "Something's Got A Hold On Me", released in 1964. Perhaps more surprisingly, I learned that Brooks is British, born in Salford in 1945. Her career started at the age of 15 when she won a Manchester talent contest. Her first promoter was Don Arden, father of Sharon Osbourne, who managed the likes of Little Richard, Black Sabbath and Electric Light Orchestra.

In the mid-sixties, Brooks supported The Beatles at their Christmas show in London. Her career has spanned rock, jazz and blues, including a stint in R&B band Vinegar Joe with Robert Palmer (best known for "Addicted to Love" and her husband Pete Gage. Still performing after sixty years, Brooks is regarded by many to be the queen of British blues.

As I go on to mention her 2010 cover of "Purple Rain" (of which only a live version is available online), I'm keen to emphasise that she Brooks has also written her own music. Her self-penned "Just An Excuse", off the Shooting Star album has been sampled by Moodymann and Bonobo.

I'm conscious that I've said very little about "As" itself, but I think the record speaks for itself. Totally unafraid of long pauses, the track begins as airy jazz before building into surprisingly high-energy funk. The perfect set opener, I can't wait to play this one out.