Mates’ Crates, a series headed up by our friend Andrei Sandu, dives into the tales behind records and digs deeper into our connections to music. Gospel-infused disco from a soul legend this time, with Eddie Kendricks' "Goin' Up In Smoke".

Over his four decades in music, Eddie Kendricks crossed paths with - and shaped the paths of - countless performers and genres. This one is a particular favourite.

Starting at the start, Kendricks was a founding member of The Temptations in 1960. Starting as the backing group for Mary Wells, they quickly became the most successful male vocal group of the decade, with hits including "My Girl", "Ain't Too Proud To Beg" and "I Wish It Would Rain". A pivotal part of early Motown, rumour had it that Kendricks romantically pursued Diana Ross and briefly dated fellow Supremes singer Mary Wilson.

After initially collaborating with Smokey Robinson, The Temptations work with producer Norman Whitfield pioneered 'psychedelic soul'. Whitfield had already assembled "The Undisputed Truth" (best known for "Papa Was A Rollin' Stone" and "Sandman") to experiment with the new style.

Kendricks himself co-wrote many Temptations songs, but grew uncomfortable with Whitfield's new musical direction. Persuaded by David Ruffin, who was fired from the group in 1968 for demanding increasingly special treatment, Kendricks left in 1971.

Many of his solo records became staples of New York's burgeoning disco scene - none more so than his "Girl You Need A Change of Mind", a favourite at David Mancuso's Loft. 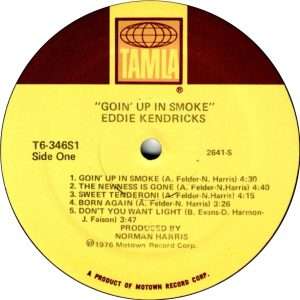 In 1976, Kendricks teamed up with MFSB founder Norman Harris, forefather of Philly soul, to record his eighth album, "Goin' Up In Smoke". Harris was lead arranger at Kenny Gamble and Leon Huff's Philadelphia International Recordings, and that sound shines through here.

It took a few listens for me to realise that, for all its dancefloor groove, the lyrics of "Goin' Up In Smoke" are everything but dancefloor: a warning about the Christian Judgement Day. Once the penny dropped, I was reminded of French duo DjeuDjoah & Lieutenant Nicholson's equally groovy "El Niño" and its warning about the climate crisis.

Only later did I twig that before hearing Kendricks' original, I'd heard it sampled on Lukas Nystrand von Unge's "It Always Rains". The mix that led me to that track remains one of my favourite house sets ever, but I digress...

That's by no means the only time "Goin' Up In Smoke" has been sampled. Whilst most might be taken by its use on Mariah Carey's "Meteorite", I'm much more drawn to Lenny Fontana and Byron Stingly's "Light My Fire", perhaps because Stingly's "Get Up Everybody" is a staple of my club sets. Stingly's band, Ten City (produced by the legendary Marshall Jefferson and best known for "That's The Way Love Is"), covered Kendricks' original in full a few years later.

This piece has been a particularly meandering adventure spanning everything from soul ballads to house edits and back, but that's just how my mind works, particularly when set on an artist as brilliant as the one and only Eddie Kendricks. Who did you think Kendrick Lamar was named after (for real!)?