Mates’ Crates, a series headed up by our friend Andrei Sandu, dives into the tales behind records and digs deeper into our connections to music. Today, a delightful lovers rock cover of a Luther Vandross classic.

Last week was the 70th anniversary of the birth of the legendary Luther Vandross, who sadly passed away after a heart attack in 2005. Entering music industry as a highly sought-after backing singer, Vandross  worked with everyone from Chaka Khan to Diana Ross, and Donna Summer to Ben E. King.

In 1974, David Bowie told him that the next year would be his year, and Roberta Flack pushed him to forge a path as a lead vocalist, initially as part of Italian-American band Change (best known for "The Glow of Love" and "Hold Tight"), then as a soloist.

As you can probably hear if you listen closely, Vandross was also a prolific producer, including for Aretha Franklin, masterminding her hit single "Jump To It" and the follow-up "Get It Right" (one of the best disco records of all time, which I've written about here). 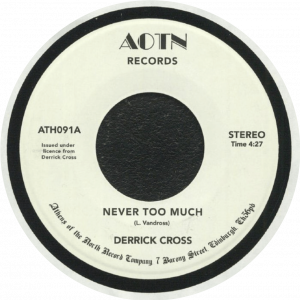 You could write a book about Vandross' prolific discography. Someone has. But for this short read, it's all about his biggest hit: "Never Too Much".

Some time in the early 1980s, Hackney-based vocalist Derrick Cross recorded a cover of Vandross' masterpiece, with a small number released on an elusive label called Denmark Records. With the original  rare enough to go for hundreds of pounds, in swooped Edinburgh-based repress label Athens of The North to bring this beautiful lovers rock version to the masses.

And that's about as much as is known about Derrick, save two other records (the one called "You Stepped Into My Life" is unfortunately not a Bee Gees cover).

I've had good luck with reggae covers lately, having been pointed to JJ Sparks' cover of Randy Brown's "I Wanna Make Love To You" by a fellow digger in Alan's Records in North London last summer.

But I've pulled enough tangents in for one piece. As the evenings get longer, stick on some lovers rock and watch the sunset.