Mates' Crates: Blacksmoke - What Goes Around Comes Around

Mates’ Crates, a series headed up by our friend Andrei Sandu, dives into the tales behind records and digs deeper into our connections to music. Obscure jazz-funk this time with Blacksmoke's "What Goes Around Comes Around".

I'm always pleasantly surprised by the tenuous links between all the music that I love - more so that anyone wants to read about them. What goes around, comes around?

My music consumption is a finely-poised balance between relentlessly seeking things I haven't heard before and listening to my favourite sets over and over. GE-OLOGY and Red Greg's set at Dekmantel 2017 has been played on Soundcloud over 62,000 times. Am I responsible for about 60,000 of these? Maybe. It's just spectacular.

I won't spend any more time fawning over my favourite selectors (Sadar Bahar also falls firmly into that camp), but I'm forever grateful for all the music I've been introduced to, in this case California-based funk group Blacksmoke and this track from their only ever album.

Formed in 1972 as Smoke, Chocolate City Records (a subsidiary of the seminal Casablanca) pulled their debut album when it was discovered that another band was using the same name. Whether your copy of the album is by Smoke or Blacksmoke is something of a lucky dip.

Not much more is known about the band, though Wikipedia claims they toured with both Donna Summer and The Isley Brothers - believe that at your leisure. 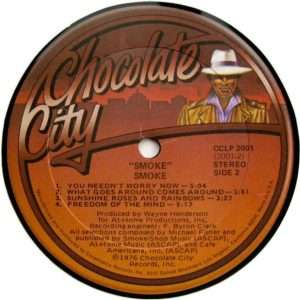 Blacksmoke's biggest hits were "Your Love Has Got Me Screaming" and "There It Is" (which reminds me in parts of Trussel, who I've written about here). I like both, but neither compare to "What Goes Around". The groove kept up by that vocal layering is beyond compare, and will stick with you for days too. Being reminded to take responsibility for your actions is no bad thing either.

On the subject of sets I've returned to dozens of times, this Motor City Drum Ensemble classic (best known for launching the Discogs price of Bileo - "You Can Win" into the stratosphere) was a staple of my university days. Another standout track there was the elusive Underdog Edits' remix of James Brown's "I'm Satisfied", and the very same Underdog has since produced a blissful extended version of "What Goes Around".

My choice to opt for the original owes to a mix of purism and outright inability to beatmatch vinyl. Definitely mostly the purism though, he lied.

In another neat link to music that I love, Blacksmoke later signed to At-Home Productions, set up by Wayne Henderson, former trombonist of The Crusaders (who I've written about here).

Small world. What goes around comes around.