Mates' Crates: Average White Band & Ben E. King - Get It Up For Love

Mates’ Crates, a series headed up by our friend Andrei Sandu, dives into the tales behind records and digs deeper into our connections to music. A transatlantic collab this time, with Average White Band & Ben E. King's cover of "Get It Up For Love".

Regular readers will be familiar with (and probably fed up of) my fascination with covers, collaborations and any kind of crossover.

As a fan of both soul legend Ben E. King and funk group Average White Band, discovering that they'd recorded an album together piqued my interest. Spotting that the opening track was a cover of Ned Doheny's "Get It Up For Love", I was sold. It isn't the only cover on the album (see also John Lennon's "Imagine" and Donny Hathaway's "Someday We'll All Be Free"), but it's certainly my favourite.

Malibu-born singer-songwriter Ned Doheny wrote "Get It Up For Love" himself, but five versions (including one by teen idol David Cassidy) were released before Doheny performed it himself. Tata Vega's version is also great, but I'll try to stay on topic. 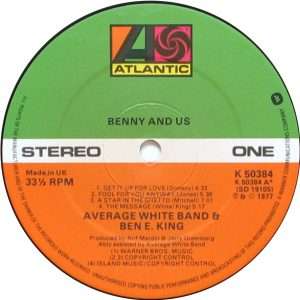 Finding out how closely AWB have worked with Doheny was almost as big a surprise as finding out that AWB are Scottish. Two years before the Ben E. King collab, AWB's Hamish Stuart co-wrote Doheny's "A Love of Your Own". A few years later, they wrote "What Cha' Gonna Do for Me", performed first by AWB, then by Chaka Khan, then by Doheny in 1988.

As is often the case with these columns, I started with a thread and spun a web, with some unexpected discoveries along the way. Intrigued by how AWB and Chaka Khan might have crossed paths (and then collaborated), I was truly shocked to discover that Hamish Stuart performed backing vocals on "I'm Every Woman", alongside Cissy and Whitney Houston.

Despite my best efforts, I struggled to unearth how Ben E. King entered the picture. Best known for "Stand By Me" alongside my own favourites "Supernatural Thing" and "Music Trance", King has also been covered and sampled extensively, but doesn't seem to have worked with AWB (or Doheny) before or since.

Nicely closing the loop though, Chaka Khan did sample AWB and Ben E. King's "A Star In The Ghetto" on her "Life Is A Dance". What a ride.