Mates’ Crates, a series headed up by our friend Andrei Sandu, dives into the tales behind records and digs deeper into our connections to music. With just a few sleeps till Christmas, it felt right to pick out something festive, and what better than Augie Rios' holiday classic.

As anyone around me at this time of year can confirm, December can be relied on to bring three things: cold, rain, and my annual obsession with Augie Rios' "Dónde Está Santa Claus?".

This has held true since 2016, when Shazaming the Christmas scene in Season 2 of Netflix's Narcos granted me the this invaluable gift, and this year is no different. In such uncertain times, the guaranteed resurgence of Augie Rios might even be somewhat comforting.

Relatively little is known about Rios. Born in New York City in 1946 to Puerto Rican parents, he first found fame as a child actor in Broadway musicals from 1957, before recording "Dónde Está Santa Claus?"  with the Mark Jeffrey Orchestra in 1958, aged just 12. 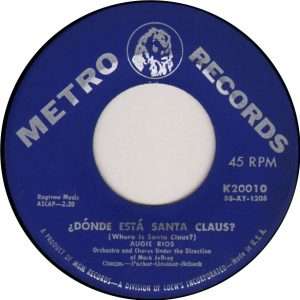 In an interview with The New Yorker in 1957, ten year old Augie talked about his love of pizza, spaghetti, watermelon and jigsaw puzzles. My guy. The B-side of "Dónde Está Santa Claus?" opens with the line "Don't care who you are, Ol' Fatso, get those reindeer off my roof!" Kid knew what he wanted.

"Dónde Está Santa Claus?" wasn't even his only Christmas record. His single "Feliz Navidades (Merry Christmas To All)" was released in 1960 (a full decade before José Feliciano's "Feliz Navidad", I might add). In an interview for "Decoding Despacito: An Oral History of Latin Music", Feliciano acknowledges that Rios' were the only Latin Christmas songs around at the time.

On the theme of "onlys", Boney M's cover of "Feliz Navidad" might be the only good Christmas disco record ever. Spanish-American actress Charo worked with Tom Moulton to record a version of "Dónde Está Santa Claus?" in 1978 for seminal disco label Salsoul. The Tom Moulton, the legendary disco producer who invented the extended mix and the 12' single. I was underwhelmed.

Nothing beats Rios's version, which for me reignites childish festive joy in a way that the usual supermarket Christmas hits playlist just can't. And as one of the three wise men of the nativity once said, where there is joy, there is a UKG remix (click it!). So silly.