Mates’ Crates, a series headed up by our friend Andrei Sandu, dives into the tales behind records and digs deeper into our connections to music. As springtime takes hold, we head to Brazil for a now-famous classic by Airto Moreira.

Born into a family of folk healers in 1941, Moreira has been making music for almost seventy years. He's played on everything from the seminal Jazz Fusion album "Bitches Brew" with Miles Davis and Chick Corea, to the soundtrack for Francis Ford Coppola's epic "Apocalypse Now". He can play more instruments than you can count on about ten hands, and his boundless discography spans collaborations with everyone from George Duke to George Benson; Dizzy Gillespie to Depeche Mode;  Chaka Khan to Paul Simon, I could go on (and on)...

But whilst I'd encourage you to explore his full body of work, I'll try my best to stay focused on the winding story of "Celebration Suite". If you watched any of the 2014 World Cup, you'll have heard Bellini's "Samba De Janeiro". If you've watched Baba Stiltz's Boiler Room from Sugar Mountain Festival (in which I believe our dear Snoodman Deejay can be spotted in the background), you'll have heard The Heartists' "Belo Horizonti". Chances are, you've heard the infectious hook of Moreira's "Celebration Suite". 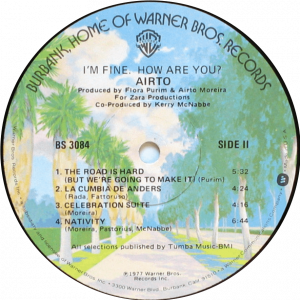 But all is not as it seems. "Celebration Suite" - released in 1977, in fact interpolates the same hook from Moreira's 1973 track "Tombo in 7/4". "Tombo" was written with Uruguayan  composer Hugo Fattoruso, but both musicians agreed that the song should be registered to Moreira, unaware of the international hit it would become a quarter of a century later at the hands of German pop producers The Bellini Brothers (incidentally named after Brazilian football legend Hilderaldo Bellini).

This Uruguayan newspaper alleges that Fattoruso later requested 25% of the royalties, but Moreira sent him $5,000 and asked to be left alone. As the iconic hook emerged once more for the 2014 World Cup, Fattoruso reportedly considered legal action.

I love that Melodic Distraction gives me a platform for sentences beginning "This Uruguayan newspaper alleges". Enjoy the music and the sunshine.