Our friends at the other end of the M62, Steam Radio, are throwing their 1st birthday party featuring Mina & Bryte, Skittles and more! 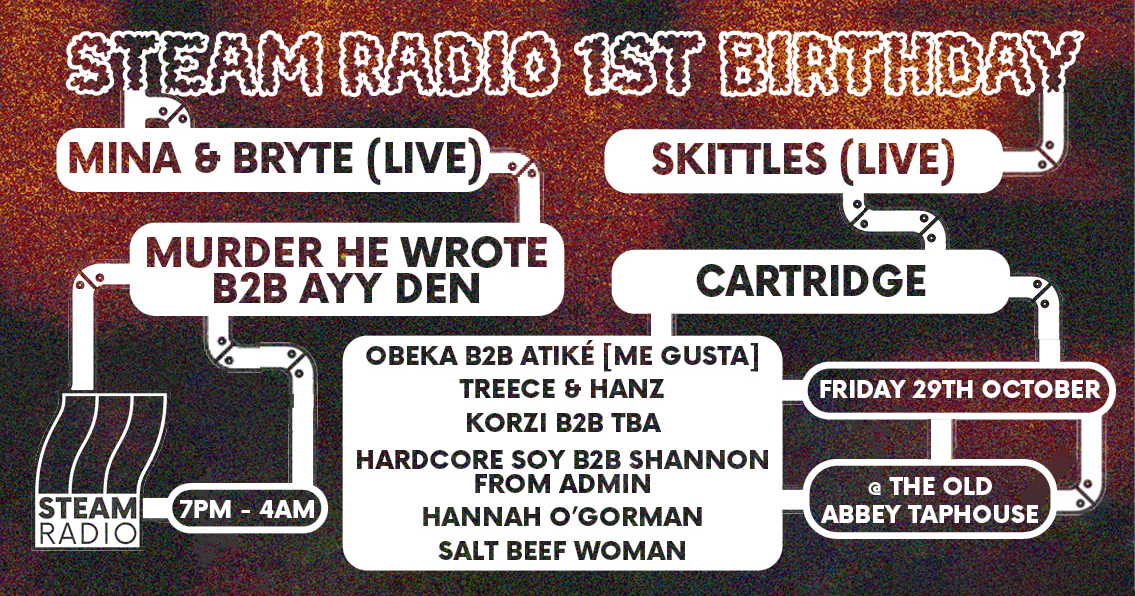 Celebrating a year of community building over the airwaves, Steam are bringing a spooky day and night party to their home, Manchester’s The Old Abbey Taphouse, on Friday 29th October. As well as afro-club pioneers Mina & Bryte, local legends Skittles, Murder He Wrote, Ayy Den and Cartidge will be showcasing their tastes to the floor, alongside a healthy helping of Steam reisdent DJs.

Originally launched in March 2020 as TOAT (The Old Abbey Taphouse Radio) as a way of keeping people connected during lockdown, the station rebranded as Steam in October 2020 after being ruthlessly canned - the team didn’t let that stop them though, instead taking the opportunity to expand their DJ roster and management team. Flash forward a year, and Steam has firmly clamped itself into the Manchester music scene as a welcoming and safe space for all creatives to come together.

As well as an incredibly diverse array of shows from some seriously talented DJs (including our very own Snoodman Deejay, NIIX, Mystique and more!), Steam has also hosted a special broadcast for LGBTQ+ History Month, a celebratory podcast and event for Black British boxer Len Johnson, and even a radio swap with ourselves! With a studio upstairs for pre-recording and live-streaming radio shows, the space has also hosted DJ workshops with a focus on under-represented groups, hosted by Shifting Spheres.