Mates’ Crates, a series headed up by our friend Andrei Sandu, dives into the tales behind records and digs deeper into our connections to music. This time, solid seventies soul from Willie Hutch with "Love Power".

If you've heard Dr. Dre's album "The Chronic" - his solo debut after splitting from N.W.A. - you've heard Willie Hutch too.  The opening moments of  Dre's "Rat Tat Tat Tat" sample the start of Hutch's "Brother's Gonna Work It Out", recorded for the soundtrack of 1973 blaxploitation film The Mack.

The story of the blaxploitation genre itself is an interesting one I've touched on before, given its ties to iconic music including Curtis Mayfield's "Superfly",  James Brown's "The Boss" and Isaac Hayes' "Hung Up On My Baby". Emerging in the 1970s in a transparent effort to appeal to black urban audiences, the films were among the first to feature black characters in major roles as protagonists, though these often played on negative stereotypes including criminal activity.

Alongside Dre, rappers from 2Pac and Daz Dillinger to Chief Keef and Kanye West have drawn on "Brothers...". It is the opening track and namesake of The Chemical Brothers' 1998 mixtape, as well as the likely namesake of a 1990 track by Public Enemy.

Much to my surprise, I'd very encountered the opening dialogue of "Brothers..." in the intro to podcasts by early-2010s 'deep house' label OFF Recordings (I know you were into that stuff ten years ago too). My chance encounter with OFF head honcho Andre Crom on the Barcelona Metro is a story for another time. 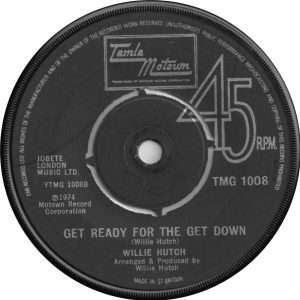 I'm digressing even more than usual. In short, Willie Hutch's music has been all over the place. Including on my radio show, where I've played both "Brothers..." and his (even) more soulful "A Love That's Worth Having".

So when I spotted a Hutch record while digging in London (and for a fiver too!), it came straight home with me. As it turns out, "Love Power" - which I hadn't heard before owning it - was his biggest chart hit. The B-Side, "Get Ready For The Get Down" is a really nice groove too.

But as you can probably tell, this piece isn't really about "Love Power", it's about the magnificent Willie Hutch. Born in Los Angeles in 1944 then raised in Dallas, Hutch signed his first record deal at the age of 20, then moved back to LA. He was soon writing and producing for pop/soul group The 5th Dimension, best known for "Age of Aquarius" - Grammy Record of the Year in 1970. Over his career, Hutch wrote and produced for Motown legends including The Jackson 5 on "I'll Be There", Smokey Robinson and Marvin Gaye.

You'd already heard Willie Hutch. And now you know it.