Mates’ Crates, a series headed up by our friend Andrei Sandu, dives into the tales behind records and digs deeper into our connections to music. This time, a foray into pop with "Aucun Coeur" Quebecois singer Michel Stax.

Bought on my first trip to a real record shop since restrictions lifted and played at my first gig in over a year, this record has come to represent a return to normality.

Buying stuff on Discogs is fun. Finding a "Near Mint" copy of a record you've wanted for years at a reasonable price on this side of the world is a thrill, and I'm filled with childish delight waiting for the post to arrive.

But you don't know what you don't know, and there's nothing like holding a gem you've never heard of after hours of digging through a dusty bargain bucket. So after a year of shipping fees and "Sort by: Price - Lowest", I've loved every second of real life record shopping.

One such find was this single by Michel Stax. I'd never heard of him, or the short-lived, chicly-named "Les Disques Oui" label, but I saw the Quebec address. "C'est Toutjours Comme Ça L'Amour" by Montreal-based trio Toulouse remains one of my favourite disco records, so I decided Michel was worth a shot.

Foreign and familiar in equal measure, I soon realised that I recognised the melody from pop and jazz standard "Sway", made famous by Dean Martin in 1954. Stax's lyrics translate to "You knew how to upset my heart and create my happiness", but the theme is similar, and the melody undeniable. I bought it immediately. 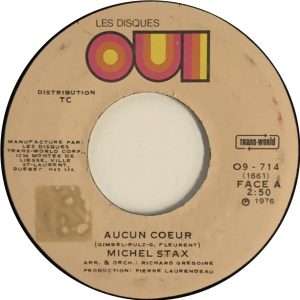 Looking into his discography, this wasn't the first time Stax (real name Léger Michaud) had covered a popular English-language song. He released "Caroline Cherie", a version of The Foundations' "Build Me Up Buttercup", in 1969.

Unlike "Build Me Up Buttercup", though, "Sway" was not originally composed for English lyrics. Despite swathes (sway-thes?) of covers by everyone from Michael Bublé to The Pussycat Dolls; Cliff Richard to George Clooney's aunt Rosemary, the melody was in fact composed as "Quién Será" (What Will Be) by Luis Demetrio and first performed by Mexican bandleader Pablo Beltrán Ruiz. As well as the 1953 cha-cha-chá original, cumbia and boogaloo versions were later released in 1966 and 1968 respectively.

It would, of course, be remiss of me not to mention the 1999 electronica version by British duo Shaft, initially based on Rosemary Clooney's 1960 version but eventually using re-recorded vocals after a copyright dispute. What primary school disco was complete without this heater? Shaft drew on Rosemary Clooney yet again the following year with their remix of her "Mambo Italiano".

But back to the programme... two weeks ago I had the pleasure of playing back to back with the delightful Hamish OOX at Fambula Garden in Belsize Park, North London. Of all the records records I played, "Aucun Coeur" had people moving and grooving like no other. Who'd have thought?