Back in the first lockdown (yeah, remember that?), we had the pleasure of welcoming South London jazz artist Jelly Cleaver in for a Lockdown Live Lounge. Flash forward a year later and Jelly returns with a brand new exciting venture: 7-piece all-female outfit, All Day Breakfast Café.

Self-professed 'South London's favourite disco band', All Day Breakfast Café have already featured on Jazz UK and Fresh Finds Spotify editorial playlists, alongside mentoring from Giles Peterson and Alanna Henry. Debut single 'Old School Struggling' saw features from the likes of EARMILK and radio-play on BBC London, Worldwide FM and more, getting our ears tingling for forthcoming debut EP 'Builder's Brew'. We chat with the girls ahead of it's release to find out more! 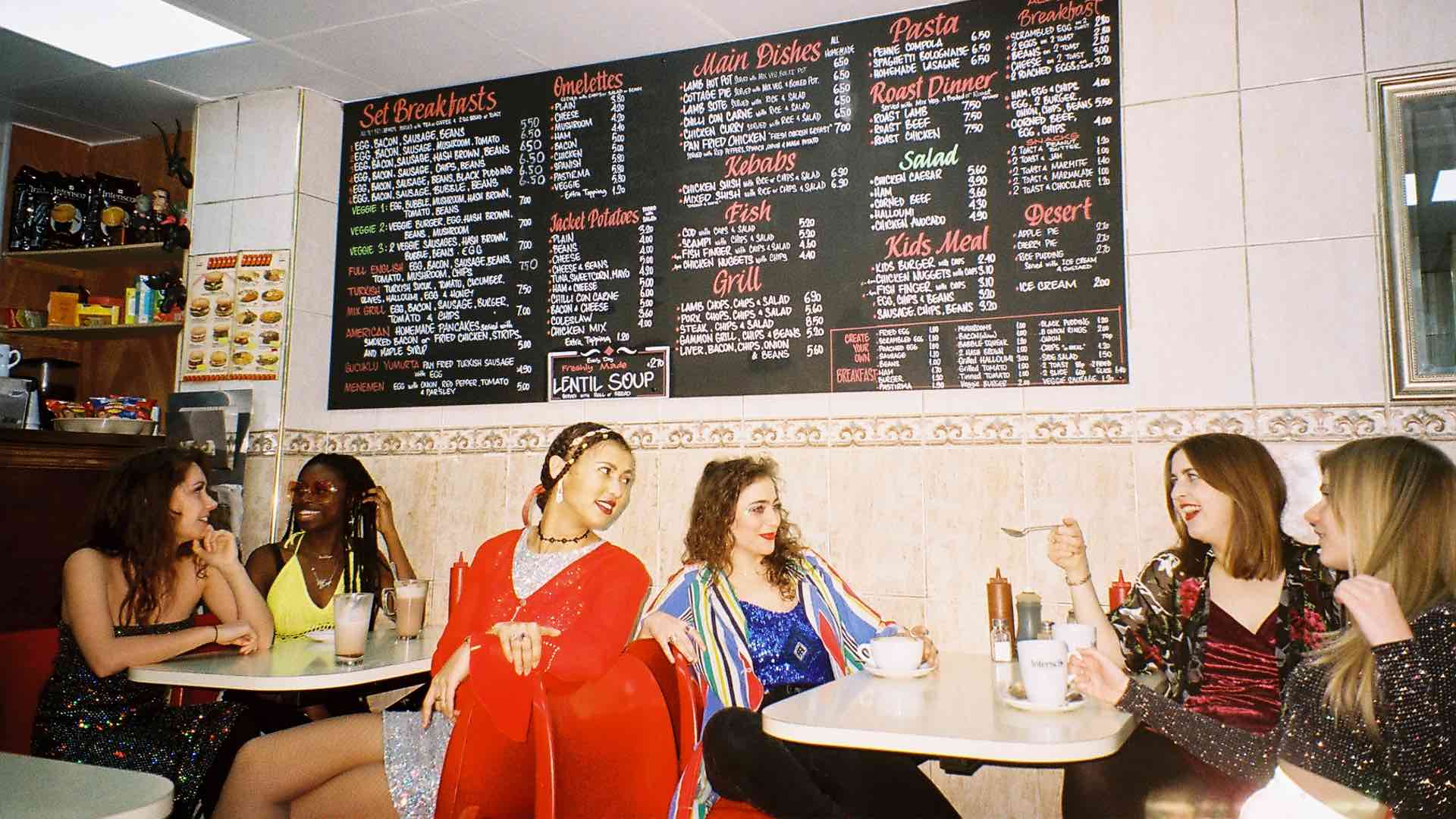 Hey Loucin, Jelly, Kasia, Beth, Lettie, Amy and Tash aka ‘All Day Breakfast Café’! We’re super excited for debut EP ‘Builder’s Brew’. What inspired the breakfast-related names for both the record and your seven-piece band?

I mean, the whole idea came from a stupid joke... We thought it would be really funny to do a photoshoot in a café while we were all eating full english breakfasts, and call ourselves ‘All Day Breakfast Café’ - so that’s exactly what we did. And breakfast puns are the gift that keeps on giving! Our EP ‘Builder’s Brew’ is a pun on Miles Davis’ jazz fusion classic ‘Bitches Brew’, although ours is maybe a bit less high-brow. We’re also planning on having a pancake tossing competition as part of our EP launch party, and hope it can lead to some delicious merchandise opportunities...

We’re a disco band with a jazz background so we love playing absolute bangers, but we’ll also bring some jazzy and DIY energy to it. We’ve all played together in various bands in the London jazz scene for years, so we definitely keep that energy, but this project allows us to let loose and really have a lot of fun. We love the classic 70s disco sound, but we wanted to also make it sound modern and of its time. We also just really want to make people dance and have a good time - that’s our main aim, so we hope people feel joyful when they listen to it and throw some impressive shapes.

Can you tell us a bit more about the process of making the EP?

We recorded it in between lockdowns last year, so we had to practice for it in local parks and in our garden (we became a bit unpopular with our neighbours). We recorded the whole EP in an absolutely manic day at Strongroom Studios, getting in around 11am with lots of snacks and leaving at 1am completely dazed and a bit drunk from tequila! I then worked with our amazing engineer Jess Camilleri on the mixes, recording extra parts and about a million backing vocals, which took a good few months. We got a bit obsessed about things, such as the sound of the hi-hats. For one of the tunes we actually hit the track limit which is around 200 tracks - but there were about 10 secret guitar parts playing at the same time so it’s not really surprising! Sometimes more is definitely more.

When I was producing the EP I was listening to a lot of the classics like Diana Ross and Chic, but I was also trying to listen to a lot of stuff from the 80s and present day to make sure the drums and bass were hitting and things like that. I’m a disco DJ so we had a lot of reference tracks. 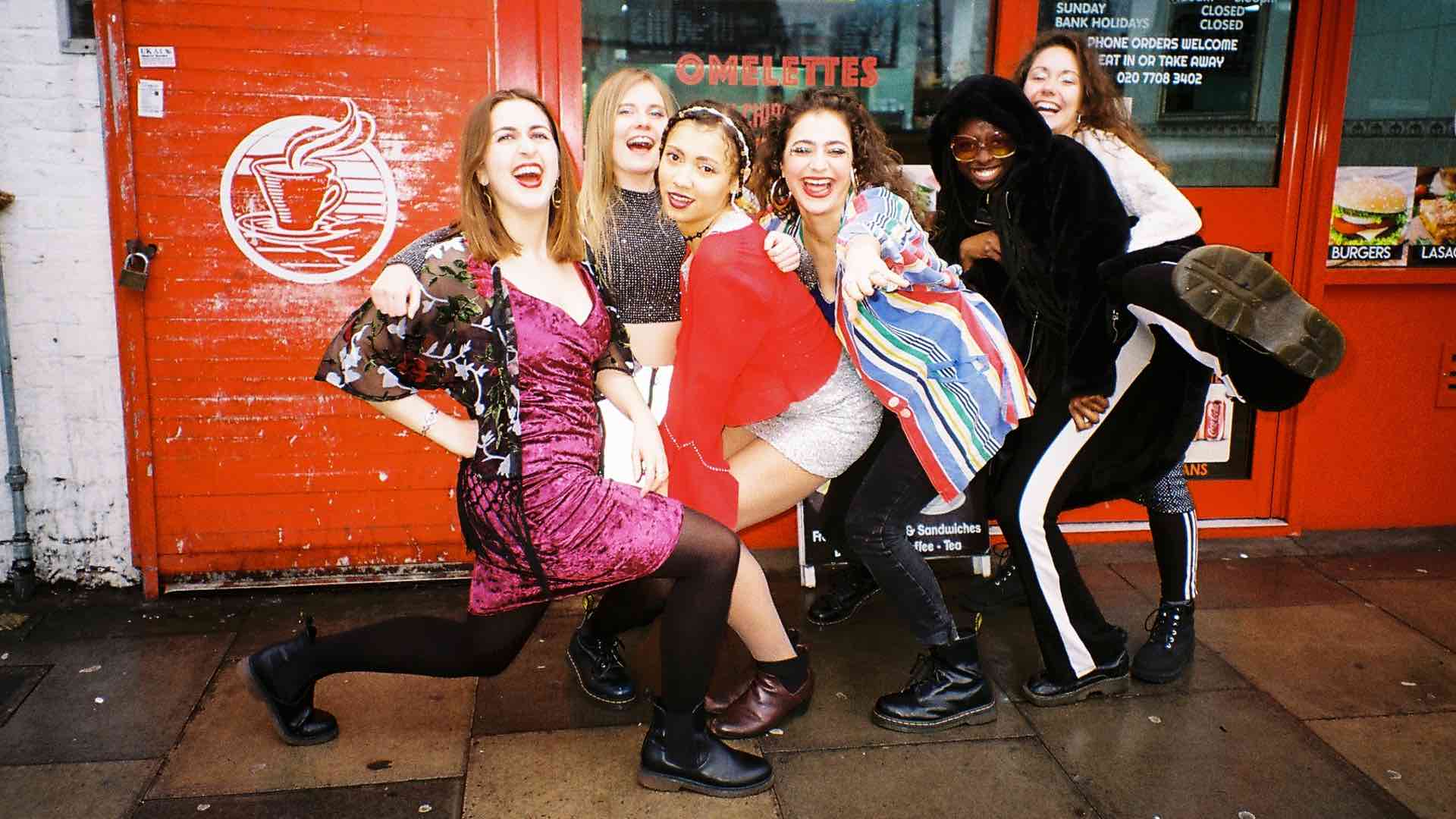 What’s the best thing about working as a seven-piece? Are there any challenges?

It’s definitely a challenge organising that many people and getting us all together for gigs! It’s also annoying that we don’t all fit in one car. But we’re all really good mates and it’s so much fun performing together, it’s a proper party on stage.

Can you tell us a bit more about the London disco scene? Are there any other emerging artists you’ve got your eyes on at the moment?

To be honest we’re the only new disco band I know! We’re trying to start the London disco revival.

With slots at Stanton Calling and Wilderness 2021 already under your belt, where would be the dream festival to perform at?

Glastoooo! It would especially be a dream to play the West Holts stage one day. Festivals are really our calling as a band, we love to get everyone up and dancing. We can’t wait for festival season next year.

What can we expect from you next?

We’ve got some exciting things lined up - we’re doing a few gigs as part of the EFG London Jazz Festival, which we’re really hyped about. Next year we’re going to be releasing some remixes of our EP which should be fire, and we’re hoping to play at lots of festivals too. The ultimate aim is to get a big gold sequin tour bus and travel the world in it!

Builder's Brew is out this Friday 15th Oct. In the meantime, check out latest single 'Sugartown Parade' ft. Rosie Turton below!