Host Spotlight: an opportunity to shine a light on our wonderful radio hosts and wider community, be it a new music release, a brand new music residency or simply to champion them as an individual. This week, we chat with our very own station kitty Lupini as she launches HEAVY TEXTURE. On 31st August, Heavy Texture presents a full day broadcast of deep listening and ambient featuring original material, mixes and works-in-progress from Claire Rousay, Dialect, Romeo Poirier and Lupini herself. We take this opportunity to find out a little more about the series, as well as Lupini's other various endeavours including an NTS residency, support slots for the likes of Goldie, and much, much more… 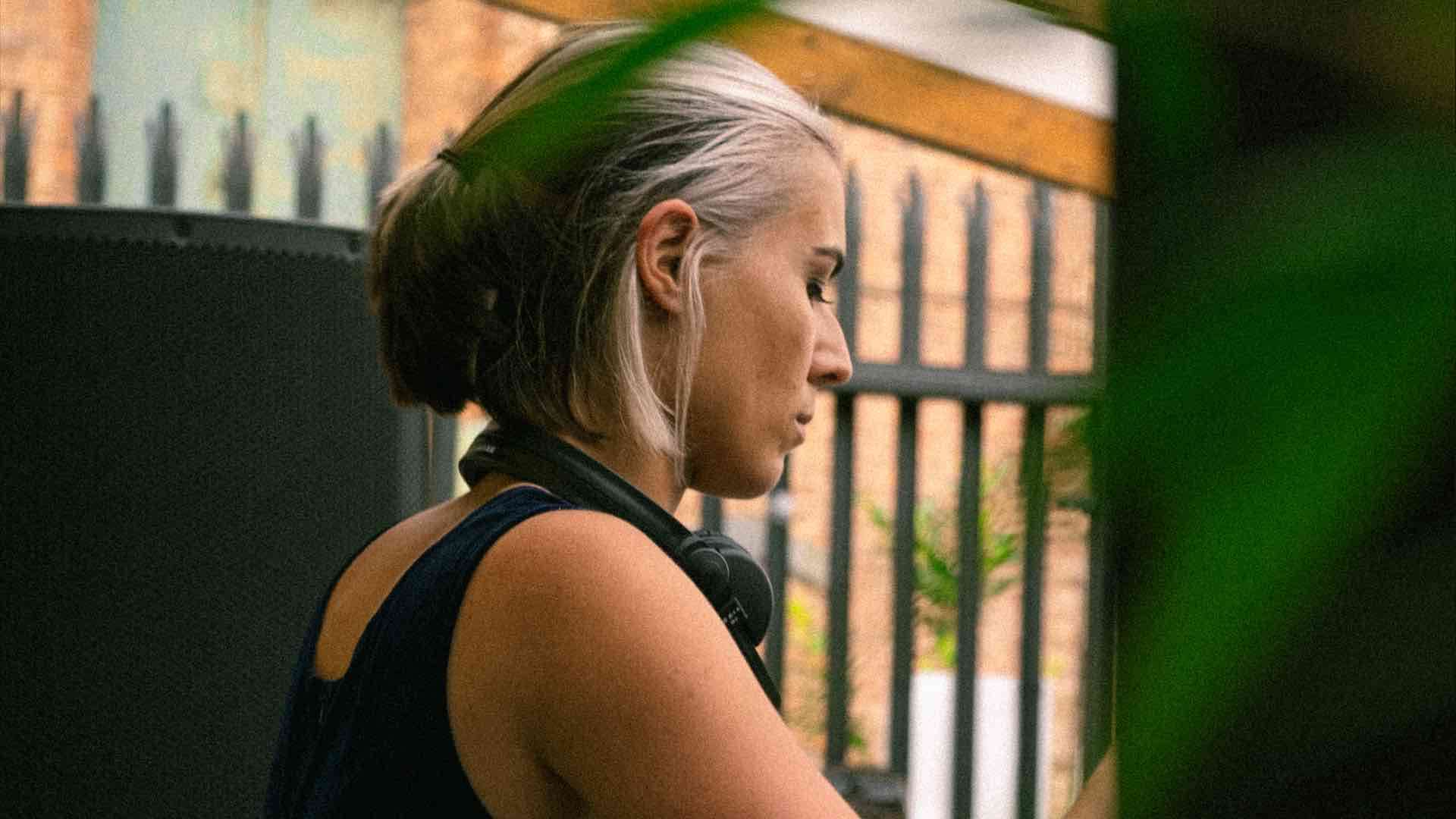 How did you first get into DJing - how was Lupini born?

Haa, you know, it’s a bit of a farce. I’d been on holiday to Venice and we’d been being childish and tagging our names in the city with paint pens. We’d dared each other to dream up a silly ‘tag’ name, and as we’d been sitting drinking and eating these lupini beans as bar snacks, I’d joked that I’m ‘salty and better with a beer’ and began using Lupini as my ‘tag’.

When I got back to Liverpool, I’d got a bit too lairy at one of our house parties and absolutely insisted on controlling the music - we had this old mixer from a pub that you fed CDs into. There wasn’t even a pitch control on it, but afterwards someone saw a photo from the party of me behind some decks and asked if I DJd. Full of bravado and blissful unawareness, I just straight-faced lied and told them yes. When they asked my name for the billing, I blurted out ‘Lupini’ - turned out it was George Maund, who asked me to come down to the Kazimier Garden and play some tunes the next week. I burnt some CDs, rolled up and just got stuck in. DJing ended up being a thing I learnt by playing out rather than in my bedroom, and I’m very grateful to all the folks that continued to platform me when I was just starting out. Special big love to George Maund, Oli from The Reeds and the Meraki team.

Not only DJing, there’s also presenting radio shows and curating line-ups too! Is there an area you prefer the most? Are there any other fields you’d like to get involved in?

Radio and broadcasting is definitely my home turf. It’s where I feel best performing and I love coming up with the narrative peaks and troughs of energy for a radio show that you can’t really get away with on a dancefloor. I’m also a chronic oversharer, and value being able to shout out artists on air and speak about their work. Sometimes it’s a little frustrating if you’ve been sent a demo and get to play it out, but if it’s played to a dancefloor then how is anyone supposed to be able to go and find the artist and appreciate more of their work?

Going into curating more lineups has been a real pleasure; it’s so nice to be able to give others the platform and encouragement to start out with DJing or performing. As well as programming Melodic Distraction Radio, I also co-run ATHE with Ben Sleia. I’ve put a stage together for this year’s Audio Farm and would love to do more of this; it’s basically just matchmaking people with music, and there’s nothing quite like the buzz of seeing someone really flourish in a set or slot that you’ve placed them for. I get the utter pleasure from filling more slots with underrepresented artists and muscling some white cis het men off the decks.

From NTS to Netil, how do your residencies differ from one another? Do you make conscious efforts to keep them separate or is there an overriding theme?

I took up the residency on Netil’s 'Kaleidosound' in October 2018(!) as one of four monthly hosts (the show is weekly on a Friday, 11:00 - 13:00) and that show was definitely my incubation ground for a lot of ideas. They really have been the crucible for everything else that followed! It started as an ambient/contemporary classical/musique concrete show, but over the years has gradually leant more into dub, IDM, pop & folk.

My residency with NTS began in February of this year - so it’s still quite fresh, but it’s starting to settle into its sound now. It's definitely an extension of Kaleidosound - it’s all kind of psyched-out, sensitive dubwise pop, post-punk and electro-acoustic stuff.

My on-again-off-again show 'Club Dread' on Melodic is a home for the meaner and grittier sounds. Techno will always have a piece of my heart and I do want to push back into the clubbier stuff eventually!

What are the ideas behind Heavy Texture and what are you hoping to achieve through it?

Just before the pandemic hit, I played at a really beautiful ambient event called Plant Life up in Leeds. I think that there’s a real lack of spaces and platforms in Liverpool for ambient or listening projects. The project basically aims to re-contextualise experimental music as something that doesn’t need to be academic or accessible only through snooty arts festivals. It’s also trying to push on the concept of Deep Listening as an active engagement with sound, rather than ambient music being a wallpaper or relaxing background activity.

Active listening is a form of meditation and can be deeply healing as a way to (re)integrate the body and mind together. Heavy Texture can hopefully be a little outlet for experimenting with some of these ideas. It’s launching with a full day takeover of radio with a few artists that I really admire, including Claire Rousay, who works in sound art, experimental, avant-garde and musique concrète. She’s prolific and has put out something like 20 or more releases since 2019. Dialect is contributing an hour’s worth of work-in-progress that was the skeleton of an album that never quite saw the light of day, and there’s a mix from Romeo Poirier and a mix from myself.

In the future, I’m going to develop some events - digital and analogue - around the theme of listening that include talks, Zoominars and interactive elements so as to break down the barrier between performer and audience.

What’s been your favourite DJ set to play so far and who would be your dream artist to support?

Ooof. Playing before Terry Riley at 24 Kitchen Street was pretty special. He’s an absolute hero of mine, I was so nervous I was quaking like a little autumn leaf! I’d love to support Terry again, especially now I feel like I’ve come a lot further in my practice. I also loved playing in The White Hotel a couple months ago, with top bunny Everett and then a wee impromptu b2b with Murlo.

Other dream supports would be (oh god, can I dream?) Kali Malone, Kaitlyn Aurelia Smith or Caterina Barbieri. On the harder side, I’d love to play more noisy shows, maybe someone like Dalibor Cruz, Giant Swan or Gabber Modus Operandi. Someone ask me to play a big fucking noisy punky techno mix or show pleaaaase.

What’s coming up for you?

So, Heavy Texture gets birthed into this world 31st August! Aaaand there might be another new radio project on the go sometime early 2022 as well. I’ve got a few nice gigs coming up this autumn with Helena Hauff, Roza Terenzi, Lucretia Dalt and The Cyclist, as well as a few local bits with QU A RR Y  and IWF. I’m doing a little Berlin gig next week as well!

I’m really looking forward to playing all night long in Soup Kitchen as a b2b with 96 Back. We’ve become a right little b2b pair over the last year and we bounce off each other beautifully. I’m biased, obviously, but that will be such a fun show.

Tune into Heavy Texture on Melodic Distraction Radio next Tuesday (31st), 10:00 - 14:00. In the meantime, check out Lupini's latest show on NTS with Caustic Soda below!